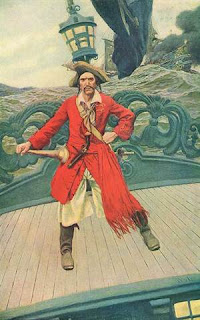 On April 11, French commandos went in with guns blazing and captured a gang of pirates who days earlier had hijacked a luxury cruise ship, the Ponant, and held the crew for ransom. This was the French solution to a crime wave that has threatened international shipping off ; those of us who have been on the business end of a pirate’s gun can only applaud their action.

The British government on the other hand, to the incredulity of many in the maritime industry, has taken a curiously pathetic approach to piracy. While the French were flying six of the captured pirates to to face trial, the British Foreign Office issued a directive to the once vaunted Royal Navy not to detain any pirates, because doing so could violate their human rights. British warships patrolling the pirate-infested waters off were advised that captured pirates could claim asylum in and that those who were returned to faced beheading for murder or a hand chopped off for theft under Islamic law.

How is it that the bastards that run the country are able to turn their mistakes into opportunities? Energy shortages demand the elimination of environmental restrictions. Food shortages demand more GE crops. The housing crisis requires tax cuts for corporations.

Nothing for the people who are being plowed under by the crisis. All we have to show for our troubles is Obama and Hillary.


When ordinary citizens have a chance to pose questions to political leaders, they rarely ask about the game of politics. They want to know how the reality of politics will affect them--through taxes, programs, scholarship funds, wars. Journalists justify their intrusiveness and excesses by claiming that they are the public's representatives, asking the questions their fellow citizens would ask if they had the privilege of meeting with Presidents and senators. In fact they ask questions that only their fellow political professionals care about. And they often do so--as at the typical White House news conference--with a discourtesy and rancor that represent the public's views much less than they reflect the modern journalist's belief that being independent boils down to acting hostile.

The Palestinian public is divided on the rocket attacks on Israel: 39.3% said the firing of these rockets was "useful" to Palestinian national interests, while 35.7% said they were harmful.

In the Iraqi government's fight to subdue the Shiite militia of Moktada al-Sadr in the southern city of Basra, perhaps nothing reveals the complexities of the Iraq conflict more starkly than this: Iran and the United States find themselves on the same side.

The causes of this convergence boil down to the logic of self-interest, although it is logic in a place where even the most basic reasoning refuses to go in a straight line. In essence, though, the calculation by the United States is that it must back the government it helped to create and take the steps needed to protect American troops and civilian officials.

Iranian motivations appear to hinge on the possibility that Mr. Sadr's political and military followers could gain power in provincial elections this fall, and disrupt the creation of a semiautonomous region in the south that the Iranians see as beneficial.

For John McCain, who has pledged to avoid even the appearance of dispensing official favors for donors, Donald R. Diamond is the kind of friend who can pose a test.

I hear that question way too often. The short answer is that after a few decades on Wall Street, you learn that when any money is at stake, people quite easily become completely and totally full of bullshit.

This is why I (to quote someone else) "consistently doubt everything, especially government and mainstream media, and asks questions that have readers asking their own questions."

There is little debate about whether the U.S. economy is in a recession. The question is how painful and long the downturn will be.

There is a growing fear among some economists that the recession will be particularly bad.

If [Bill] Kristol were just a conservative hatchet-man, his columns would simply be predictable. After nearly five months of columns, however, the problem is more jarring — his work is that of an awful columnist, a weak writer, and a boring political observer. This isn’t about ideology; it’s about talent, or in this case, the lack thereof.

We have long known that the Justice Department tortured the law to give its Orwellian blessing to torturing people, and that Defense Secretary Donald Rumsfeld approved a list of ways to abuse prisoners. But recent accounts by ABC News and The Associated Press said that all of the president's top national security advisers at the time participated in creating the interrogation policy . . .

These officials did not have the time or the foresight to plan for the aftermath of the invasion of Iraq or the tenacity to complete the hunt for Osama bin Laden. But they managed to squeeze in dozens of meetings in the White House Situation Room to organize and give legal cover to prisoner abuse, including brutal methods that civilized nations consider to be torture.