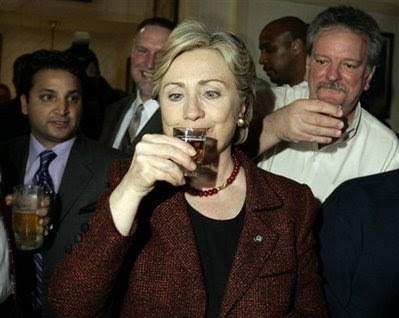 Whatever comes of Barack Obama's ill-timed and ill-thought-out remarks on small-town , the last 60 hours will surely be remembered as the lowest period of the Democratic primary season, and maybe the whole election. While Obama's comments are dominating the discussion, as they should, I think this picture of Hillary Clinton's pandering and cringe-inducing shot-drinking in is this best representation of this political train wreck.

Obama is an angry black man who also happens to be an arugula-eater.

That, and he lacks experience. And isn't ready to lead on day one.

Did I mention that I'm bitter?

One thing I wonder about is how much do "campaign gaffes" really matter? My guess is that their perceived importance is mostly an illusion. I mean, people point to plenty of examples of campaigns that lost, in large part, "because of" this or that gaffe or damaging random thing dredged out of the record but you never see an example of a campaign that won because it successfully avoided gaffes.

You know, all this hand-wringing about young women's alleged alienation from second-wave feminists would have a lot more saliency if Hillary Clinton were not a representative of the New Democratic wing of the party, if her campaign staff and advisers were not dominated by veterans of her husband's campaigns, if she were not running a racially polarizing campaign, if she didn't have severe electability issues (high negatives, issues with the truth), and if she could plausibly represent change and non-elitism after living for eight years in the White House.

People are simply voting against for other reasons than that she is a woman. . . . I've met a few people at bars over the last two years that have openly admitted that they would never vote for a woman . . . any woman. They weren't Democrats and most of them won't vote for a black guy either. I'm not saying that hasn't been the recipient of some misogynistic rhetoric from political commentators. But none of it has come from the Obama campaign.

's problem is not that she is a woman but that, for a whole host of reasons, she is a flawed candidate. Rejecting her is in no way a rejection of feminism.

I have decided to support Sen. Barack Obama for president for this reason: Of the three candidates, Obama is the only one who gives the citizens of this country room to take a leap of faith.

It is 9 a.m. Do you know where your child is? For hundreds of parents in 's most important Republican stronghold, the answer last week was a surprise: Supporting Barack Obama for president.

Last week, held its mock presidential nominating conventions, organized by government teacher Jeanette Jackson every four years since 1996. Students pick their party affiliations and, until this year, they reflected 's GOP loyalty. The last time the presidential race was wide open - Bush-Gore, in 2000 - Republicans outnumbered Democrats about 400 to 200.

The ratio was reversed last week, with 487 students at the Democratic convention on Thursday and 199 with the GOP on Wednesday.

"I personally want to see the looks on your parents' faces when they find out where you hung out today," said Caitlin Hogge, an 18-year-old senior whose nominating speech helped Democrat John Edwards to a second-place finish ahead of Hillary Clinton. Obama won in a walk, with 423 delegate votes.

"My parents vote primarily Republican," said Madrigal, 18, who attended the Democratic caucus for Obama in February. "We're tired of voting in our parents' place. We're ready for something new. We're practicing our right to decide for ourselves."

U.S. Rep. Geoff Davis, a Hebron Republican, compared Obama and his message for change similar to a "snake oil salesman."

He said in his remarks at the GOP dinner that he also recently participated in a "highly classified, national security simulation" with Obama.

"I’m going to tell you something: That boy’s finger does not need to be on the button," said. "He could not make a decision in that simulation that related to a nuclear threat to this country."

Rep. Geoff Davis has publicly apologized to Barack Obama after it was reported that he referred to Obama as "that boy" at a GOP fundraiser.

President Bush often argues that history will vindicate him. So he can’t be pleased with an informal survey of 109 professional historians conducted by the History News Network. It found that 98 percent of them believe that Bush’s presidency has been a failure, while only about 2 percent see it as a success. Not only that, more than 61 percent of the historians say the current presidency is the worst in American history. In 2004, only 11.6 percent of the historians rated Bush’s presidency in last place. Among the reasons given for his low ratings: invading , “tax breaks for the rich,” and alienating many nations around the world. Bush supporters counter that professional historians today tend to be liberal and that it’s too early to assess how his policies will turn out.