Is America A Great Country Or What? 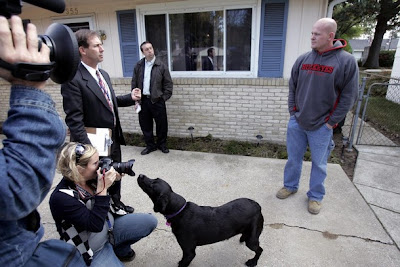 It took less than 24 hours for Joe the Plumber to go from John McCain hero to much scrutinized celebrity laughing stock.

Didja hear the one about Joe signing a lucrative contract to work on all seven or eight or how many houses that John and Cindy McCain have? Thought so.

Poor Joe. One minute he's shooting his mouth off about having problems with Barack Obama's plan to tax the wealthy, never mind he happens to be out of work at the moment, and the next he's being outted for not having a plumbing license and being, should we say, casual about paying taxes.

Oh, and he isn't even called Joe.

Un-Joe's 15 minutes of fame began when he stopped Obama on a street in Toledo last weekend and complained about his tax plan.

Footage of the encounter landed on YouTube, and conservative bloggers quickly Hail Maryed it to McCain, who mentioned "Joe the Plumber" some 20 times during the final presidential debate on Wednesday night without bothering to do even the most cursory vetting. (Sounds familiar, eh?)

Turns out that even if Wurzelbacher was in a position to buy the plumbing business, it's unlikely that his personal income would ever climb over $250,000, which means that under Obama's plan he not only would not pay more taxes but might end up with a sizable tax cut.

As if all of that doesn't have McCain's handlers reaching for the Zantac, it turns out that Wurzelbacher is a poster boy for voters being "disenfranchised by typo."

His name is spelled Worzelbacher, not Wurzelbacher, on Ohio voter registration rolls, a simple data-entry error that would disqualify from voting in his home state, as well as Florida and Wisconsin.

The balding Wurzelbacher's smiles have now turned to frowns.

"I don’t have a lot of pull. It’s not like I’m Matt Damon," he complained.

Oh, and he has yet to talk to McCain.

Oh, and isn't Michelle Malkin an extraordinary hypocrite? Read this and then this.