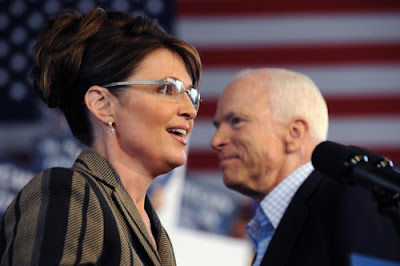 I think it's now fair to say it's a war. My view is that after the McCain peeps had made that crazy decision and realized after the fact what they had on their hands, they put their best face on it. They knew that the normal rules for a veep -- a press conference, full media accessibility, airing of all the biographical details -- would have required the candidate to quit before November. So they tried to shield her from actual democracy -- a dangerous decision for the rest of us, but a rational, cynical decision for a campaign running a delusional liar as the potential next president of the US. Palin of course, lives in her own little, somewhat nutty, world and now believes her manifest destiny has been thwarted.

It's a massive, unmissable clusterfuck and has been for two months. They just can't hide it any longer. And the pick is a devastating one - because it basically destroys John McCain's credibility as a presidential decision-maker. His first major decision as a future president is one of the worst in American political history. That alone should be enough to seal his fate next Tuesday. You need nothing else.

With polls showing Barack Obama pulling ahead of John McCain in the US presidential race, the Republican party's hard-right evangelical allies are starting to panic. As the political elites in the movement freak out, they're sowing the seeds of grassroots anxiety that God will punish America for electing Obama.

-- SARAH POSNER
In the widescreen-format, director's-cut edition of The 2000s: A Retrospective, Republicans might well look back on 2006 as the year that Iraq sank their electoral fortunes. Back then, before econopocalypse loomed over every hill and household in America, the cost of the unpopular war looked unsustainable, and the casualties unnerving. Violence jerked and spiked, victories stayed local and brutally temporary, and pent-up frustration at the long three-year decline from cakewalk to crapshoot had no other release: in came the Dems. It wasn't an avalanche, but it was enough — enough to accustom America to a new Congress with a new agenda, and enough to give the Democrats themselves the space and the time to set about constructing a more durable majority.

Come November, that majority is set to swell — hopefully cresting somewhere below the point at which Republican opposition is reduced to the clawing of furniture and the gnashing of teeth. Regardless, however, the war in Iraq's rotten domestic legacy will have crawled out from the pit of '06, and the stench of that year will hang around the Republican party for a long time.

-- JAMES POULOS
In this desperate week of fighting to hold onto Washington power, the GOP will play its last card--to arouse voter fear of what one-party rule would do to the country, of what the "Socialism" of Barack Obama would mean if supported by filubuster-proof majorities that would give Nancy Pelosi and Harry Reid a free hand.

By implicitly acknowledging the defeat of their White House ticket, Republicans could make the argument in an attempt to save such endangered Senate seats as those of Elizabeth Dole in North Carolina, Saxby Chambliss in Georgia and Minority Leader Mitch McConnell in Kentucky.

Since Americans have an innate mistrust of concentrated power, the notion could gain traction for voters with short memories. They would have to forget the past two years of "checks and balances" that prevented extending health care to impoverished children and setting reasonable timetables for withdrawal from Iraq, among other majority desires.

If Mr. Obama wins we could possibly see any or all of the following: a federal constitutional right to welfare; a federal constitutional mandate of affirmative action wherever there are racial disparities, without regard to proof of discriminatory intent; a right for government-financed abortions through the third trimester of pregnancy; the abolition of capital punishment and the mass freeing of criminal defendants; ruinous shareholder suits against corporate officers and directors; and approval of huge punitive damage awards, like those imposed against tobacco companies, against many legitimate businesses such as those selling fattening food.

Obama is outperforming any Democrat back to Jimmy Carter among white voters, getting 45 percent to McCain's 52 percent. But in the South, it is a very different story. Obama fares worse among Southern whites than any Democrat since George McGovern in 1972.

Whites in the East and West tilt narrowly toward Obama (he's up 8 and 7 points, respectively), and the two run about evenly among those in the Midwest. By contrast, Southern whites break more than 2 to 1 for McCain, 65 percent to 32 percent.

Who do you want running the country?
-- EZRA KLEIN