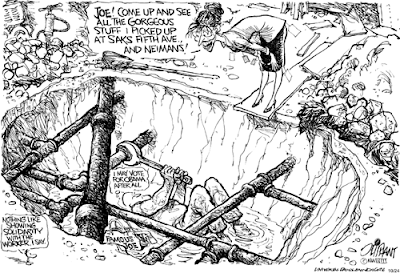 At this point Palin and McCain are so out of sync with each other that, even when they try to polarize by broad-brushing millions of their fellow Americans, they can't even synchronize their own smears.

-- DICK POLMAN
Lashing out at past Republican Congresses instead of Pelosi and Reid, and echoing your opponent's attacks on you instead of attacking your opponent, and spending 150,000 hard dollars on designer clothes when congressional Republicans are struggling for money, and when your senior campaign staff are blaming each other for the loss in The New York Times [Magazine] 10 days before the election, you’re not doing much to energize your supporters.

The fact is, when you’re the party standard-bearer, you have an obligation to fight to the finish. I think they can still win. But if they don't think that, they need to look at how Bob Dole finished out his campaign in 1996 and not try to take down as many Republicans with them as they can. Instead of campaigning in Electoral College states, Dole was campaigning in places he knew he didn’t have a chance to beat Clinton, but where he could energize key House and Senate races. I think you’ll find these sentiments shared by many of my fellow Republican strategists.

McCain has a knife to his heart right now. And he can try to go out with some dignity or he can fight to the very last, using every dirty trick and dishonorable argument his team can dream up. There is an argument that McCain should consider more than his reputation. He should consider the cost of delegitimizing the next president in the eyes of his supporters. He should consider the behavior of his supporters and how badly they've been misinformed. John McCain should let his campaign die with a little dignity and some honor.

[A] look at some ad buy statistics provided by a Democratic source shows that the RNC put more money down on Palin's attire than they and the McCain campaign have spent on a weeks-worth of advertising in half a dozen, potentially, swing states.

From October 13th through October 19th, the McCain campaign and the RNC spent a combined $125,000 on advertisements in New Hampshire, roughly $90,000 in West Virginia, and $86,000 in Maine. In each of those states, the Republican ticket is fighting Obama for a small but potentially significant number of electoral votes.

In North Dakota and Georgia, the RNC and the McCain campaign did not spend a penny on advertising during that same week. These two states seem likely to break for McCain, but it is not inevitable: Obama could potentially pick off their votes.

In Indiana, the RNC spent $450,000 last week on ads while the McCain campaign did not spend anything. An additional $150,000 could have meant 33% more airtime over the course of a week.

Then there is Michigan. The GOP pulled out of the state a few weeks ago and so hasn't spent any cash on advertisements there. The $150,000 they put down on Palin's clothes would not have purchased much airtime in that large market, but it may have saved McCain from the public criticism that he was subjected to for abandoning the state.

The "Obama as Socialist" storyline seems to be gaining momentum, mostly because he's said some stupid things on the topic, such as telling Joe the Plumber that he wants to redistribute the wealth.

His remark has given the McCain campaign a slight opening, and they've done everything they can to keep this narrative going. McCain's people know it's probably the only issue left for him, and they're going to ride it into the sunset one way or the other.

But politics aside, I must confess that this notion of Obama as a socialist is laughable. . . . [L]et's keep in mind that two weeks ago, the United States government semi-nationalized our banking system. And two weeks before that, they took an equity position in one of the largest companies in the world, AIG. And a few months before that, they orchestrated an unprecedented bailout of Bear Sterns, making it possible for JP Morgan Chase to purchase the bankrupt investment bank.