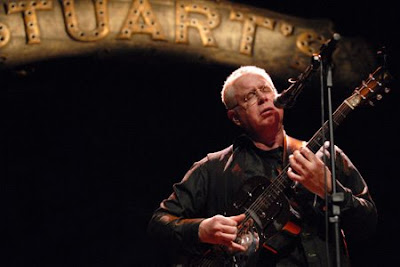 It would be nice to say that while Bruce Cockburn is best known for his socially conscious songs, he also is a great guitarist. But unless you dwell at the left end of things -- whether it be politics or the FM radio dial -- it is unlikely that you've ever heard of the Canadian singer-songwriter.

That is a damned shame because there is not merely a currency to Cockburn's songs but a wonderful poetic depth, such as in these lyrics from "Pacing the Cage":

* * * * *
Cockburn, who was born in 1945, grew up on a farm near Pembroke, Ontario. His interest in music was sparked when he found a guitar in his grandmother's attic that he played along to radio hits.

He attended Berklee College of Music in Boston for three semesters in the mid-1960s, but dropped out to pursue a performing career that early on included the Ottawa bands The Children, The Flying Circus and Olivus.

Cockburn went solo in 1969 and even his early work, long on rural and nautical imagery, is reflective of his conversion from agnosticism to Christianity, which in turn begat his interest in human rights and environmentalism.

While Cockburn's exquisite guitar playing and songwriting and singing abilities made him popular in Canada, he didn't break into the U.S. market until 1979 with the release of Dancing in the Dragon's Jaws and "Wondering Where the Lions Are," a hit single from that album that included this vivid imagery:

His second and only other certifiable U.S. hit came with the release of "If I Had a Rocket Launcher," a single from the 1984 album Stealing Fire that probably remains the most played Cockburn song -- on the left side of the FM dial, of course -- because of the lyrics and his powerful delivery. The song was written after he visiting Guatemalan refugee camps in Mexico that had been attacked by Guatemalan military helicopters:

I want to raise every voice -- at least I've got to try
Every time I think about it water rises to my eyes.
Situation desperate, echoes of the victims cry
If I had a rocket launcher . . . Some son of a bitch would die

Of Cockburn's nearly 30 albums, my favorite is The Charity of Night, a 1997 magnum opus recorded with bassist Rob Wasserman and vibist Gary Burton that includes film noir-like monologues in his foggy baritone amidst political and love songs, including the transcendental "Pacing the Cage."

* * * * *
Cockburn continues to perform his unique blend folk and rock in relative obscurity, which begs the question as to why he hasn't attained the status of, say, Richard Thompson, an English folk-rocker who is quite similar to Cockburn in most respects, including a jaw dropping finger picking style that has to be seen -- not merely heard -- to be believed.

The answer, in part, is that Thompson catapulted into a solo career after several years as an original member of Fairport Convention, the prototypical English electric folk rock band fronted by the late great Sandy Denny. The rest,

I'm afraid, is just dumb luck. Or lack thereof.
Posted by Shaun Mullen at 1:06 AM
Email ThisBlogThis!Share to TwitterShare to FacebookShare to Pinterest

How is that name pronounced? I have always heard KOburn, with the ck remaining silent.
This may be a factor in his obscurity. Folks don't like performers with tough to pronounce names.
chamblee54

KOE-burn is correct, altho it is frequently mispronounced as COCK-burn.

I have known of Bruce Cockburn for years, own many of his albums, and seen him perform at least twice. I had no idea that other people don't know him.

His Christmas album from the mid-90s is excellent. It has quite an eclectic mix of songs. Some are well known, others are not.

Ah...Bruce. I first heard his music in 1976 and was hooked. Check out his mid-70s album, *Night Vision* -- "Mama Just Wants to Barrelhouse" is a classic, cheeky blues! The next album, *In the Falling Dark*, began a more conscious immersion into jazz, with some wicked violin licks. *Stealing Fire* was a real departure for Bruce -- suddenly he seemed to move into solid rock territory ... but his earliest work is the most intricate, I think ... He's a Canadian gem :-) Thanks for the tribute, Shaun!