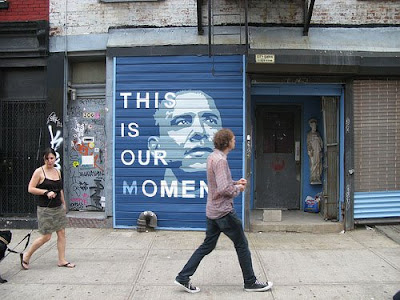 Many Obama partisans detected a vague racial appeal in the anti-urban framing. But the attacks also highlighted an overlooked aspect of the Illinois senator's rise: that in a country forever in thrall to its frontier and small-town heritage, he is the rare White House contender who really is a creature of the big city.

This raises two questions: Is Obama's ascent a further sign -- on top of volatile gas prices, plummeting home values in the exurbs and recent population upticks even in Baltimore and Newark -- that our cities are back and that the country is making peace with its non-agrarian side? And would a big-city president address as never before the problems of our urban cores -- blighted housing, shoddy public transit, dismal schools?

The wilderness years are never pleasant, but if Republicans find themselves there after Nov. 4, they have an opportunity to revive the GOP. If Republicans become champions of an ambitious conservative reform agenda, they will begin the road back to political dominance.

Sarah Palin is refusing to call people who would bomb abortion clinics terrorists. Yes, she condemns their actions. But she is parsing the definition of terrorism so as not to offend that small, but vocal part of the conservative base who may not see clinic bombers as heroes, but refuse to place their actions in a a moral context that equates the tactics of the jihadis with the Eric Rudolphs of the world.

This is moral cowardice. The purpose of bombing abortion clinics (it hasn't happened in a decade) is exactly the same as fanatics who set off car bombs in crowded markets; that is, to intimidate and to terrorize people. . . .

Moral equivalency between jihadis and Christians is not, cannot be based on comparative body counts but only on the intent of the attacker – the only possible moral context you can place any attack on innocents. Palin's parsing is an ignominious example of a politician who would rather pander to the extreme of her base instead of taking a clear, unambiguous moral stand against political violence. She should be condemned for this by those on the right who claim moral ascendancy over the rest of us due to their religious beliefs as well as any thinking conservative who cares about the moral standing of our candidates.

You get a passport for the first time in your life last year? I mean, I don't know what you can say. You can't say anything. . . . I think they ought to be just honest about it and stop the nonsense about, "I look out my window and I see Russia and so therefore I know something about Russia." That kind of thing is insulting to the American people. . . . [I]n a world that is so complicated, so interconnected and so combustible, you really got to have some people in charge that have some sense of the bigger scope of the world. I think that's just a requirement.

Palin's wardrobe malfunction harks back in various ways to one of the most famous moments in modern Republicanism: Richard Nixon's 1952 "Checkers" speech. And it makes Nixon's cynical exploitation of cultural resentments look heartfelt. . . .

Pat Nixon's cloth coat saved Nixon's career. The speech, with its palpable anger toward privileged elites – and their inconvenient, reality-based rules – defined Nixon's politics and has been an evergreen theme in Republican campaigns ever since. It resonated because Nixon's anger was authentic, rooted in his life experience. He had come of age during the Depression, the son of a grocery store owner in rural California. He was forced to turn down a scholarship to Harvard because his family couldn't afford the living expenses. Instead, he attended Whittier College in his hometown. Some trace Nixon's famous contempt for eastern elites to this initial disappointment.

Sarah Palin, on the other hand, may sincerely resent the heck out of elites, but her attitude has no basis in any real kind of disadvantage. Palin could have easily purchased her campaign wardrobe herself, as she and her husband are quite well off.

Barack Obama is noted for his powerful intellect, but I don't think he gets nearly enough credit for the mental dexterity it takes to be simultaneously an Islamic theocrat, atheistic communist and national socialist while posing as a center left candidate. Those must be the compartmentalization skills they taught him at that Manchurian madrasah in Indonesia.

Anti-Americanism is good politics and flourishing in most countries. It will receive fresh energy from the McCain-Palin ticket's new definition of an anti-American as being anyone who is not Joe Six-pack living in Middle America.

This parochial narrative of Palin's handlers, who seem to be as unaware as she of the world out there, is far from the values of most other nations. But it comforts the perception of Americans and their government as being hypocrites whose actions are far less noble than their words