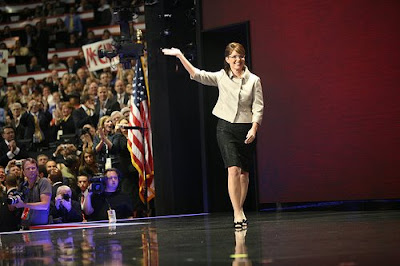 Pat and I have the satisfaction that every dime that we've got is honestly ours. I should say this, that Pat doesn't have a mink coat. But she does have a respectable Republican cloth coat, and I always tell her shed's look good in anything.
-- RICHARD NIXON'S "CHECKERS" SPEECH (1952)
The Republican National Committee has spent more than $150,000 to clothe and accessorize vice presidential candidate Sarah Palin and her family since her surprise pick by John McCain in late August.

According to financial disclosure records, the accessorizing began in early September and included bills from Saks Fifth Avenue in St. Louis and New York for a combined $49,425.74.

The records also document a couple of big-time shopping trips to Neiman Marcus in Minneapolis, including one $75,062.63 spree in early September.

The RNC also spent $4,716.49 on hair and makeup through September after reporting no such costs in August.

The cash expenditures immediately raised questions among campaign finance experts about their legality under the Federal Election Commission's long-standing advisory opinions on using campaign cash to purchase items for personal use.

The political implications are more than a little humiliating. Consider all the McCain campaign messages a story like this steps on -- "elitist," "small-town values," "big spender," "relating to 'real' America," etc.

Sarah Palin wasn't a beet farmer last week. She was a governor. Presumably, she had clothing already. The sort of clothing that was appropriate for giving political speeches and attending campaign meetings. You can imagine the need for a couple new things (lots of different climates, etc), but not $150,000 for a whole new wardrobe. And not $150,000 of other people's money for a whole new wardrobe. The RNC has a strong direct mail operation: Many of those donations are coming from middle income folks terrified that Barack Obama is going to raise taxes on all Americans who refuse to memorize the Koran. It's money spent to defeat Obama, not make Palin look fabulous.

The campaign says that it was always their intention to donate the clothes and diamonds and gold to a worthy charity when the campaign is over. I don't really believe that, and I'm sure Palin is crushed to hear that she can't keep her bling. I think it should all be donated to the Smithsonian, where future generations can view it like the Queen of England's Family Jewels.

There is already an attempt to blame the media — as in, the liberal media would have looked askance at Palin if she wasn’t clad in Neiman Marcus, but this won’t wash. Republicans, RNC donors and at least one RNC staff member have e-mailed me tonight to share their utter (and not-for-attribution) disgust at the expenditures.

This sort of spending is without precedent — the closest approximation for any campaign I’ve ever covered is make-up expenses for television interviews and commercial shoots — and [Steve] Schmitt's weakly defensive response tonight indicates that the campaign is deeply embarrassed by it and has nothing to say in their defense. Spokespeople have clammed up, a sure sign that they're trying to figure out who authorized the expenses and who knew about them. Did Palin wear all of the clothing? Where is it kept?

Airfare for your kids to fly around to events on the taxpayers' dime: $21,012.

Designer clothes for your botched Vice Presidential roll out: $150,000.

John Edwards' $400 haircut mattered because it added to the impression that he was a pretty boy. Sarah Palin's $150,000 wardrobe makeover, paid for by the Republican National Committee at the cash registers of Saks, Neiman Marcus, and Barneys, matters for a kind of opposite reason: It explodes the idea that she's a middle-class woman of the people. In a sense, this is unfair. If Palin was wealthy, she'd have had the leather boots and tailored suits already. And if her look is hugely important to the McCain campaign, or at least to the crowds she draws, why shouldn't the RNC pay for it? Isn't her image a legitimate campaign expense?

Two reasons why this doesn't fly, I think. The first is that the price tag is just too high, too many teacher and nurse and firefighter salaries. The second is that all this money spent on clothes, etc., points out exactly how much Palin is trading on her sexuality, her winks, her look.

Just think: each and every one of those dollars will not be spent defending a contested Congressional seat. Sarah Palin: Shop on!

Last Friday, the New York Post's famous gossip column, "Page Six," printed what seemed like a devastating report, with potential to impact the election. "Though he's battling GOP accusations that he's an Ivy League elitist, Barack Obama has a lifestyle of the rich and famous," the report read. "While he was at a meeting at the Waldorf-Astoria at 4 p.m. Wednesday, Michelle Obama called room service and ordered lobster hors d'oeuvres, two whole steamed lobsters, Iranian caviar and champagne, a tipster told 'Page Six.' "

Page Six is known for being less than absolutely devoted to the truth, especially when it's going after one of its column's favorite targets. (Sometimes, those targets seem related to the interests of the newspaper's parent company, Rupert Murdoch's News Corp.) Still, even for Page Six, this story reeked. There was the thin sourcing, of course. Plus -- she ate Iranian caviar? Come on. Apparently, someone just couldn't resist adding that extra little bit of detail, but it was obviously too good to be true.

Lo and behold, it was -- turns out Obama couldn't even have been at the hotel at the time the column said she was.