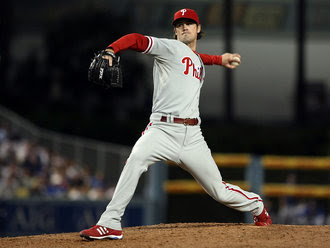 My love of baseball was nurtured on these spring and summer evenings while my father was on shift work, and I had learned the finer points of the game -- from the suicide squeeze play to the art of bunting to when to intentionally walk a batter -- before I could read and write. I also learned that baseball "is only a game," as my mother would say with varying degrees of conviction, which was a damned good thing because the Phillies lost a lot, most famously in 1964 when they led the National League by six and a half games with 12 to play but managed to blow it.

In fact, the franchise made such a habit out of losing that it notched an American professional sports record 10,000 losses last year, which makes it all the more fitting that a year later my beloved Phillies are in the World Series for only the fourth time in their 125-year history and for the first time since 1993.

The opening game against the Tampa Bay Devil Rays is tonight in St. Petersburg.

* * * * *
The Phillies' only World Series win in 1980 was the product of a star-studded team, while their appearances in 1983 and 1993 were flukes -- a combination of over-achieving players and luck. No one really expected these teams to go all the way and they didn't. The 2007 edition won the National League wild card berth by a hair's breadth but was swept in the league Division Series.

The 2008 team is another matter altogether with a nucleus of highly talented players who came up through the Phillies farm system (among them Cole Hamels, Chase Utley, Ryan Howard and Shane Victorino) as opposed to going on gadzillion dollar spending sprees for free-agent players as the New York Yankees have done.

The Phillies made quick work of their post-season opponents, defeating the Milwaukee Brewers in four games in the NL Division Series before eliminating the Los Angeles Dodgers in five games in the NL Championship Series.

Meanwhile, the Devil Rays have to be considered the Cinderella team of the decade.

Just one year removed from finishing with an American League-worst 96 losses, the Rays shocked the baseball world by going 97-65 on their way to their first playoff berth and AL East title in the franchise's 11-year history.

The Rays made quick work of the Chicago White Sox in the AL Division Series, taking them in four games, but had to take the defending World Series champion Boston Red Sox to a decisive seventh game before prevailing in the AL Championship Series.

* * * * *
This is not a World Series to quicken the pulse of baseball fans everywhere as would, say, a New York Yankees-New York Mets series or a series between the Yankees and Los Angeles Dodgers. The television ratings are expected to be low.

But so what? After years of imbalance between so-called big market and small market teams, there is an astonishing parity in Major League baseball with eight different teams playing int he World Series in the last four years and half of the 30 teams appearing in the last decade.

The difference is the Phillies' bullpen. Brad Lidge, who while occasionally making things interesting, is the best closer in baseball with a perfect 41-for-41 in save opportunities during the regular season and perfect 5-for-5 in the post season, while Lidge's set-up men, J. C. Romero and Ryan Madson, have a combined earned run average of 0.77 this month.

If the Phillies don't struggle after a long layoff, they should be able to take at least one of the first two games in the domed toilet known as Tropicana Field before returning home to the most enthusiastic fans in baseball at Citizens Bank Park for Games 3, 4 and 5 in the best-of-seven series.

Long suffering Philadelphia fans (think of all the sucky Flyers, Sixers and Iggles teams of the last 25 years in addition to the Phillies) are unaccustomed to feeling confident. But I do. And predict that the Phillies will take the World Series in five games -- six games tops.

Posted by Shaun Mullen at 1:39 AM
Email ThisBlogThis!Share to TwitterShare to FacebookShare to Pinterest

I certainly hope they do. First, I'm a National League die-hard. Second, my father -- despite living in STL Cardinal country most of his life -- has long been a Phillies fan; he attended a Phils' game on leave while he was in the service in the early 60's and has been hooked ever since.