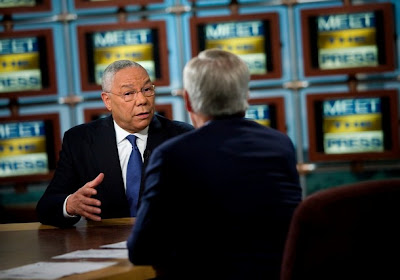 Colin Powell's endorsement of Barack Obama underscores how clearly and irreparably John McCain has split open the fault line in the GOP.

In going against McCain, whom he has known and admired for two decades, the party’s keynote speaker in 2000 and former Bush Secretary of State cited Sarah Palin and the William Ayers tone of the Republican campaign and praised the "inclusive nature" of Obama's as key reasons for his decision.

If, against all odds, McCain wins, traditional Republicans like Powell and those pillars of the GOP before the rise of the Religious Right and Karl Rove’s divisive tactics will be all but shut out.

If McCain loses, the struggle for the soul of a battered minority party will be ideologically fierce

-- ROBERT STEIN
[M]ost galling must be what Powell said about his judgment, his steadiness in moment's of crisis. Powell and McCain are both in their early 70s. Obama is a quarter century younger. And in so many words Powell said that compared to Obama, McCain simply lacks the seasoning, the maturity to be president

-- JOSH MARSHALL
"Secretary Powell says his endorsement is not about race," Limbaugh wrote in an e-mail. "OK, fine. I am now researching his past endorsements to see if I can find all the inexperienced, very liberal, white candidates he has endorsed. I'll let you know what I come up with."

-- JONATHAN MARTIN
Powell has gotten a good look at what's become of his Republican Party, and he really doesn't like what he sees.

-- STEVE BENEN
I don't think that Colin Powell's endorsement of Barack Obama is a huge deal one way or the other. It strikes me as more of a "you don't need a weatherman -- ahem -- to know which way the wind is blowing" sort of thing. But the current dynamics of the race are that the election is in 17 days, and McCain needs something to upset the dynamics while Obama needs to keep producing stories and events that sustain his momentum and run out the clock. This is one of those events.

-- EZRA KLEIN
It is clear that Powell thinks the modern Republican Party has stretched way beyond where he’s willing to go in terms of its race rightward. The concerns he laid out about the current GOP extend from the selection of Gov. Sarah Palin as VP, to the prospect of two more conservative judges on the Supreme Court, to the steady increase of Islamophobic fear-mongering that has characterized the Party since 9/11. Now, it is fair to say that Powell — himself always a rather moderate Republican — may have simply been pushed off the edge as the party lines shift direction. And the Republican base will not take his defection as a repudiation, because Powell is precisely the type of fellow that they want out of the Party anyway. The purification process may soon give the GOP the unanimity of a political graveyard, but God help them if they aren’t redoubling their efforts to excommunicate the insufficiently zealous.

This took me back to McCain's selection of Palin as a way of stepping on Obama's convention bounce. But all bounces fade, so they were basically stepping on an illusion. Obama is stepping on McCain's lifeblood here -- time. That isn't an illusion. [Powell] just robbed McCain of oxygen. They are slowly tighnening the grip. The cobra-clutch is in full-effect.

And now here's Powell, probably the only Republican moderate with a meaningful national profile, speaking in detail about problems with McCain, about the process of growing disillusioned with McCain, and vouching for Obama's readiness to lead and fitness for office.

Now that the most prominent military figure of our era - also a lifelong Republican, also George W. Bush's first Secretary of State, also a friend of John McCain's for 25 years - has publicly endorsed Barack Obama, it will be fascinating to behold the McCain surrogates and under-the-radar whisperers as they try to spin this one away. Maybe we'll get variations of these:

1. Colin Powell has no credibility anymore, ever since he lied at the United Nations.

2. Colin Powell, a longtime moderate and supporter of abortion, has never been a real Republican anyway.

3. Colin Powell lives in McLean, Virginia, and we all know that Northern Virginia is not the "real" Virginia.

6. We've still got Joe the Plumber.