Scenes On The Front Lines: 'More Than Just A Vote . . . A Chance At History' 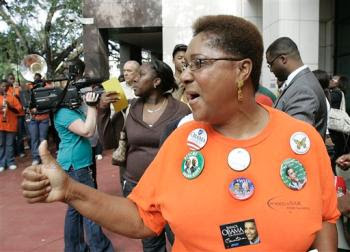 Avis Simmonds waits to vote in Tallahassee, Florida
Beyond the name calling and bitter partisanship that are hallmarks of this election year, there are some touching stories emerging from the lines at early voting stations.

From a medical student in Evansville, Indians:

"I squeaked in just before the 7pm deadline to find two very frustrated poll workers and a line of a couple dozen people, due to problems with the computerized voting system not accepting people's driver's licenses. It was taking about 7-10 minutes per person just to get the computer to accept them as valid and to print out their ballot, causing very long delays.

"For me the most moving moment came when the family in front of me, comprising probably 4 generations of voters (including an 18 year old girl voting for her first time and a 90-something hunched-over grandmother), got their turn to vote. When the old woman left the voting booth she made it about halfway to the door before collapsing in a nearby chair, where she began weeping uncontrollably. When we rushed over to help we realized that she wasn't in trouble at all but she had not truly believed, until she left the booth, that she would ever live long enough to cast a vote for an African-American for president."

From a voter in Cincinnati:

"I happened upon some friends of my mother's — three small, elderly Jewish women. They were quite upset as they were being refused admittance to the polling location due to their Obama T-Shirts, hats and buttons. Apparently you cannot wear Obama/McCain gear into polling locations here in Ohio . . . They were practically on the verge of tears.

"After a minute or two of this a huge man (6'5", 300 lbs easy) wearing a Dale Earnhardt jacket and Bengal's baseball cap left the voting line, came up to us and introduced himself as Mike. He told us he had overheard our conversation and asked if the ladies would like to borrow his jacket to put over their t-shirts so they could go in and vote. The ladies quickly agreed. As long as I live I will never forget the image of these 80-plus-year-old Jewish ladies walking into the polling location wearing a huge Dale Earnhardt racing jacket that came over their hands and down to their knees!

"Mike patiently waited for each woman to cast their vote, accepted their many thanks and then got back in line (I saved him a place while he was helping out the ladies). When Mike got back in line I asked him if he was an Obama supporter. He said that he was not, but that he couldn't stand to see those ladies so upset. I thanked him for being a gentleman in a time of bitter partisanship and wished him well.

"After I voted I walked out to the street to find my mother's friends surrouding our new friend Mike — they were laughing and having a great time. I joined them and soon learned that Mike had changed his mind in the polling booth and ended up voting for Obama. When I asked him why he changed his mind at the last minute, he explained that while he was waiting for his jacket he got into a conversation with one of the ladies who had explained how the Jewish community, and she, had worked side by side with the black community during the civil rights movements of the '60s, and that this vote was the culmination of those personal and community efforts so many years ago. That this election for her was more than just a vote . . . but a chance at history.

"Mike looked at me and said, 'Obama's going to win, and I didn't want to tell my grandchildren some day that I had an opportunity to vote for the first black president, but I missed my chance at history and voted for the other guy.' "

From a commenter at Ta-Nehisi Coates' blog:

"My father (85 year old African-American and, in fact, a 'public intellectual" who helped coin the phrase 'African-American' 40 years ago, a phrase we now take for granted on our census forms) and his wife (77 old European-American, the term they both hope will replace 'white' someday, and life-long civil rights activist and academic) voted this morning in Atlanta, GA. My stepmother emailed me this morning to tell
me about their experience, early voting, getting 'fragile elderly' treatment from the poll-workers, wishing she could kick up her septuagenarian heels after casting her vote.

"I sat in my office, reading her email, and wept. Then, I went down the hall to my colleague's office, sat down, and wept. After seven decades of constant struggle, my father walked into that booth and knew that his life's work was now done. My stepmother can think of every person who secretly and not-so-secretly thought of her as some kind of race traitor, smile and think 'I told you so!' "

"Obama will win, I'm sure he will. But today, my parents did. I am so
deeply, deeply grateful."

And finally, from a WaPo story on the melding of the old and the new -- and the white and the black -- in West Virginia.

"I didn't know them from a load of coal. But they knew what they were doing. Just talking to them, I saw what nice people they were.

"Look, race is still an issue. We're not nearly where we should be, but when it got to your pocket book, that became the determining factor in this race.

"For now the race issue went away. Race is gone, OK?"