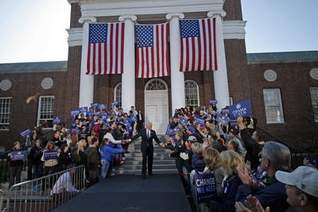 NEWARK, Del. -- What to make of the fact that Joe Biden and his wife Jill are graduates of the University of Delaware, while both McCain campaign strategist Steve Schmidt and David Plouffe, his counterpart on the Obama campaign, are products of the university's political science program?

Probably not a whole lot beyond it being a pretty big coincidence for such a little state.

In any event, it seems like years ago and not merely last October when the DF&C and I bumped into Biden outside the University of Delaware Stadium before a football game and I rather disingenuously introduced this Class of 1965 alumnus and self-admitted mediocre freshman team halfback to her as "the next Secretary of State of the United States."

I was tacitly acknowledging that Biden's campaign for president was likely to fall short but anticipated that the Democratic standard bearer, whomever he or she might be, would be ending the Republican hegemony in Washington some 13 months from then. And mind you, this was well before the economic meltdown helped supercharge Barack Obama's campaign.

In any event, Biden acted like he appreciated my kind words.

Fast forward to this sun-drenched Halloween day on the North Green of Delaware's tree-lined campus, as lovely a collection of Late Georgian-style classrooms and laboratories as exists anywhere outside of England, and Memorial Hall in particular, where I took most of my undergraduate classes longer ago than I care to remember and Biden and I sat at the knee of a revered poly sci professor who inspired us to go out and change the world.

Well, the world has changed very little because of Biden and not at all because of me, but it was nostalgia supreme as I stood amidst a crowd of about 5,000 people, most of them students, and basked in the glow of a man who in all likelihood will be Vice President Elect of the United States four days hence. The warm-up speaker was Biden's wife Jill, who received a BA at Delaware in 1975 and her fourth degree, a PhD, here in 2006.

Biden delivered familiar stump-speech fare peppered with obligatory "It's good to be home" references, and urged students not just to vote but to help mobilize Pennsylvania residents whom he said would be keys to a Democratic victory.

As it is, Delaware is solidly blue, its neighbor to the north is trending strongly in that direction, and from my own observations there already may be an Obama-Biden volunteer for every Keystone State voter so organized seems this campaign.

* * * * *
My fondness for Biden as a fellow First Stater transcends his politics.

As I noted in an appreciation on the afternoon of his first joint appearance with Obama, Biden wears his working class roots proudly. He happens to be one of the least wealthy members of the Senate, is a pro-choice Catholic, has balanced mundane constituent services such as getting a Korean War-era medal for the father of a friend with an outspoken but nuanced opposition to the Iraq war and trips to overseas hot spots, most recently Georgia. (The nation, not the state.)

Biden has lost none of his loquaciousness and his penchant for the ill-timed remark was considered a detriment even when he was on the short list as a potential Obama running mate. He has gotten at least 60 percent of the vote since he beat a long-time incumbent Republican senator in a 1972 squeaker, faces only token opposition this year and remains extremely popular back home despite his generally liberal views in a state that is staunchly moderate.

He has been true to form on the campaign trail, exhibiting a firm grasp of foreign policy when not occasionally putting his foot in his mouth, but most importantly doing exactly what is required of a vice presidential running mate: Advancing Obama without hogging the spotlight in speaking before comparatively small crowds in battleground states in the closing days of the campaign.

She has been the story with numbing regularity, as opposed to advancing McCain's agenda, most recently the barely concealed contempt she is provoking among some campaign officials who believe she is a loose cannon who is intentionally undermining the ticket to advance her own career.

Then there is the reality that she has a firm grasp of nothing beyond red-meat politics and that some of the things that have come out of her mouth have been appalling.

Well back from the crowd today on the University of Delaware North Green was a McCain-Palin counter rally. There were 10 people there: Eight people holding signs, a police officer and Secret Service man.

Posted by Shaun Mullen at 12:34 PM
Email ThisBlogThis!Share to TwitterShare to FacebookShare to Pinterest