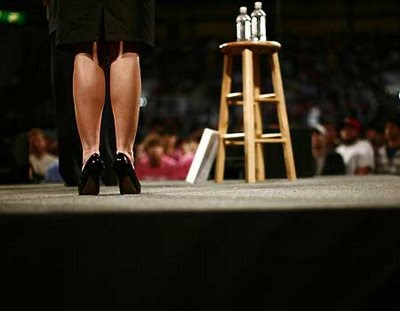 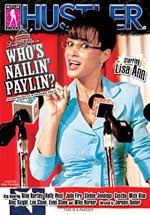 Would Sarah Palin be running for vice president if she had a big wart on her nose? Of course not.

Now that we've gotten that no-brainer out of the way, let's move on to why she is John McCain's running mate: It certainly isn't her experience or world view, so it's pretty easy to conclude that a big reason is her MILF-ness, and I've lost count of the number of times I've seen The Old Guy stare at her shaply derriere when they're on stage together.

Kathleen Parker, the conservative syndicated columnist whose candor about Palin's stunning incompetence resulted in a slew of death threats from right-wing Republican knuckle draggers, writes that:

"It is entirely possible that no one could have beaten the political force known as Barack Obama -- under any circumstances. And though it isn't over yet, it seems clear that McCain made a tragic, if familiar, error . . . Will he join the pantheon of men who, intoxicated by a woman's power, made the wrong call?

"Had Antony not fallen for Cleopatra, Octavian might not have captured the Roman Empire. Had Bill resisted Monica, Al Gore may have become president, and Hillary might be today's Democratic nominee.

"If McCain, rightful heir to the presidency, loses to Obama, history undoubtedly will note that he was defeated at least in part by his own besotted impulse to discount the future. If he wins, he must be credited with having correctly calculated nature's power to befuddle."

Yes, Palin is "objectively hot," as one male blogger put it. But for the record, I'm not befuddled because for me Palin is a turnoff.

You see, I've never been attracted to women who use their sexuality as a cudgel, and make no mistake about it: This woman is not being used by the men who run the McCain campaign. If anything she is using them.

Palin may be a cipher, but she knows exactly what she is doing down to wearing a polar bear lapel pin even though as Alaska governor she fought their designation as an endangered species.

The temptation to view Palin through a feminist prism apparently is irresistible, or maybe it's just that Michelle Cottle ran out of things to write about:

"Can someone please tell me what the hell happened? This presidential election was supposed to be a high-water mark for feminism. Hillary Clinton entered the primaries as the first female front-runner in our nation's history. Better still, she wasn't running as a Woman Candidate. . . .

"The Palin pick is disheartening on so many levels. For starters, even what little we know about the Alaska governor's policy views is enough to make a traditional feminist weep. The staunchly conservative Palin not only opposes abortion rights (even in cases of rape or incest), she also supports abstinence-only sex education and takes a strict free-market approach toward health care."

Memo to Michelle: You don't have to meet the commonly held view of what a feminist is to be a worthy politician. In fact, this is precisely the kind of crap that kept tripping up some of Hillary Clinton's most fervent supporters.

Even if Clinton's backside is not exactly in Palin's league, there is no question that there is a double standard when it comes to how woman political candidates are covered by the news media -- and that includes woman reporters as well as men.

Palin's high-end shopping spree was not nearly as newsworthy as her nutty views are. And the gal did need new duds, so the whole affair seems to me to be more of a kerfuffle than a scandal.

But this is truly outrageous:

"Who was the highest paid individual in Senator John McCain's presidential campaign during the first half of October as it headed down the homestretch?

"Not Randy Scheunemann, Mr. McCain’s chief foreign policy adviser; not Nicolle Wallace, his senior communications staff member. It was Amy Strozzi, who was identified by the Washington Post this week as Gov. Sarah Palin's traveling makeup artist, according to a new filing with the Federal Election Commission."

To use a simply awful pun, McCain and his handlers have a bad case of electoral dysfunction and it is they who are befuddled.

Photograph by Reuters
Posted by Shaun Mullen at 6:00 AM
Email ThisBlogThis!Share to TwitterShare to FacebookShare to Pinterest

Bill Maher points out that Sarah's makeup artist is also her foreign policy adviser, so.... it "you betcha" ain't as bad as it appears.

I'm reminded of the forum I found about a month ago for women of the Republican persuasion ... The ladies raved about Palin's hair, glasses, fabulous shoes ... and her lack of "cankles," which apparently Hillary Clinton has. It looked to me at the time like these women were going to vote for McCain/Palin because Palin was so, well ... fabulous. She may look fabulous, especially since she had the $150,000 wardrobe/makeup renovation, but as Dorothy Parker once said about character, "Ugly goes right down to the bone."

Your comment about using sexuality as a "cudgel" reminded me of a scene in A Prayer for Owen Meany involving a hot and sexually intimidating mom of one of Owen's classmates at Exeter.

It's a great scene from a great book.

www.burgos-3d.com said...
This comment has been removed by a blog administrator.
4:04 AM

Get Me In Discount Codes said...

I have the same views as you have on women who use their sexuality as a cudgel. I seriously dislike such ladies and Palin is one of those women.