All Aboard For The Republican Right-Wing's Flagellation Station Express 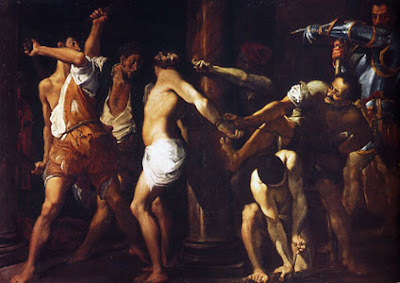 Lordy be! In only six days the angry mantra of the John McCain-Sarah Palin campaign will be silenced. You know the one I'm talking about: That some of us are not true Americans because of where we live, what we do for a living, where we went to school and, horror or horrors, because we support a Muslim terrorist for president.

But you can bet your dangling chad that while we will be filling this welcome void by beginning the arduous task of pulling America from the smoldering ashes of the Age of Bush, the angry flagellation that has recently broken out among the holiest of the Republican right-wing holy will intensify.

This writ large is their own version of the McCain-Palin mantra, only here it's real Republicans vs. elitist Republicans.

Wall Street Journal columnist Peggy Noonan is among those already being lashed for having the temerity to not only part ways with President Bush, but with his wannabe successor, as well. Same for former Bush speechwriter David Frum and the lengthening list of GOP bigs who have endorsed Barack Obama, most prominently the tribally traitorous Colin Powell.

"We won’t tolerate those sorts of people on our sinking ship, and it is our sinking ship. Leave us to drown in peace!" is how conservative pundit Daniel Larison mockingly puts it.

This whips-and-chains vaudeville show reminds us that the Republican Party is precariously close to toppling into the abyss where reside Rush Limbaugh and the twentysomething percent of Americans who still believe that Bush is doing a heck of a job.
* * * * *
Poor Bobby Jindal.

It seems like only yesterday that the Louisiana governor was being described as a rising star in the Republican firmament. But after the smear job that the lynch mob has done on Obama it's difficult to see room being made for a dark skinned guy with a funny name on future national tickets.

* * * * *
The pundits at National Review Online, the cyberchild of the magazine founded by conservative Republican godfather William F. Buckley Jr., have spent the last few months piddling on his grave as they have relentlessly bloviated about Obama while completely missing the big picture.

From Obama's fleeting relationship with Bill Ayers to claims he is a socialist and/or communist to comparisons to Hitler and Munich 1939 to whether his birth certificate is genuine, the NRO gang has prattled on and on . . . and on and on. So enamored of the smell of their own self-righteous holes have they been that they never paused to consider that while culture warring and character assassination might have worked in 2000 and 2004, 2008 is a whole different ball game.

This is on full display in Pennsylvania. Although McCain has made it his "firewall" state, he is spinning his wheels in the voter-rich Philadelphia suburbs because families there are a whole lot more concerned about making ends meet than whether Obama is the demon spawn in a coat and tie.

* * * * *
We also have the folks at NRO, along with their fellow travelers at the Weekly Standard, to thank for their role in Sarah Palin's star turn.

During the summer of 2007, cruises sponsored by these august journals docked in Alaska and editors and writers trooped up to the governor's mansion where they, almost to a man, fell madly in love with a woman who has become become the Lizzy Borden of the McCain campaign.

It is not just that William Kristol, Fred Barnes and Rich Lowry, among other bright conservative journalistic lights, were smitten by a woman whose utter absence of substance was not off putting, but their man crushes continue even as reports multiply that Palin has gone rogue and is at war with the Old Guy. Kristol in particular is righteously indignant that the object of his affections is getting such lousy treatment in the Lower 48.

The joke, of course, is on them.

Because while Palin has little chance of being a force in 2012, her fierce anti-intellectualism has short-term appeal and she is bound to be a player in the ongoing disintegration of the Republican Party, which with her help has a fighting chance to go from having a lock on power in Washington to a political anorexic whose power base consists of Deep South states in hardly any time at all.

I like what you write, but I must take issue with you here.

To use this image in such a frivolous way is offensive to many devout Christians. I don't want a theocracy. I revere both Christ and the Establishment clause in the constitution as well as your free speech rights. So while you have the right to say what you will about Christianity, I can also respectfully ask you to be more sensitive to the things we find holy. Please remove this image immediately.

I appreciate your sensitivity, but find it off putting that you believe certain works of art in the public domain -- in this case a most famous one -- should not be allowed to be viewed except in a context that hews to your own strict parameters. I have used not dissimilar images in posts on the Bush administration's embrace of torture and will continue to do so when appropriate.