Leading Pennsylvania Pollster: It's All Over For John McCain Bar The Shouting 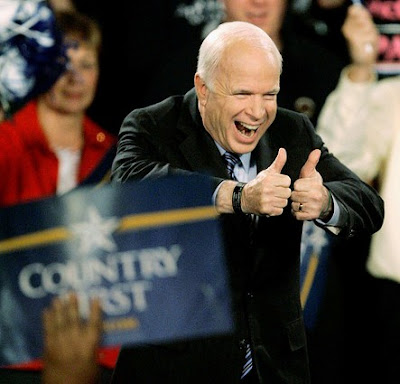 G. Terry Madonna is a familiar talking head on CNN and other news channels these days and even more in demand because John McCain is making his last stand in Pennsylvania.

There probably is no pollster more knowledgeable and well spoken when it comes to Keystone State politics than Madonna, who is the man behind the F&M Poll (formerly the Keystone Poll) at the Center for Politics & Public Affairs at Franklin and Marshall College in Lancaster, where he is director.

Madonna and I worked together for many years when I was an editor at the Philadelphia Daily News. He was going into the field for the final national pre-election F&M poll (summary of the most recent poll here) when I caught up with him.

MULLEN: Pennsylvania is now being described as McCain's "firewall" state. Given that he is trailing in most polls, does that make sense?

MADONNA: Yes it does. McCain can't win Iowa, New Mexico or Colorado with their 21 Electoral College votes. He is not winning a single [John] Kerry state, so he's picked Pennsylvania with its 21 votes to make his last stand.

MULLEN: What percentage of Pennsylvania voters remain undecided at this late date? Are there enough to decisively tip the result?

MADONNA: Well, there are perhaps 10 percent genuine undecideds. To change the outcome, you would have to assume that all of these voters are going to vote for McCain -- something I don't believe likely.

MULLEN: What are the greatest concerns for Pennsylvania voters?

MADONNA: Overwhelmingly the economy, especially issues relating to personal finances. All other issues, including Iraq and moral issues, are very low in importance.

MULLEN: I asked you this in an interview just before the Pennsylvania primary in late April: What happened to all those Reagan Democrats?

MADONNA: They are here and many will vote for McCain, but the Southeast will deliver big for Obama and that's a bigger problem for McCain. Does Obama win the way Governor Rendell won in 2006 by taking the Philadelphia suburbs? Maybe not by the same percentage, but among the same demographics and geography.

MULLEN: What effect did the selection of Sarah Palin have in Pennsylvania? Was there any migration of angry Hillary Clinton supporters to McCain-Palin?

MADONNA: Not really. Palin helps among core Republicans and a bit among Reagan Democratic women, but among the Clinton liberal, pro-choice women she has had the opposite effect.

MADONNA: He has stayed on message, been very discliplined, cool and unflappable, and presented a case for assisting folks caught up in the recession. He has made no big mistakes and raised record amounts of cash, and understood how to win a national election.

MULLEN: What has McCain done wrong?

MADONNA: He could not escape his identification with George Bush -- almost half the voters believe he will continue the economic policies of Bush. He never developed a strategic campaign -- it's been all tactics. But given the economy he was not likely to win anyway.

MULLEN: Given that going negative seems to have backfired, is there anything that McCain can do to recover at this late date?

MULLEN: How decisive were the three presidential debates?

MADONNA: They were more decisive than anyone thought. Voters saw a self confident, reassuring, calm and cool Obama who did not appear to them to be a radical. He passed a big threshhold in the debates -- his readiness to be president.

MULLEN: Is there any "big" story that you think the mainstream media has underplayed?

MADONNA: Obama's lack of experience and his thin resume.

MULLEN: So who takes the marbles on November 4?

MADONNA: The odds are 80-20 that Obama will be the next president.

Posted by Shaun Mullen at 2:16 AM
Email ThisBlogThis!Share to TwitterShare to FacebookShare to Pinterest