The Joe Biden That I Know & Admire 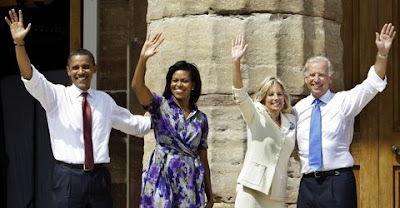 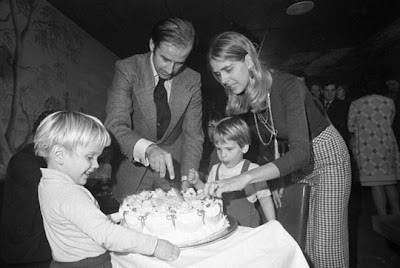 While Delaware has its charms, notably its great beaches, it is mostly a place to go through to get to somewhere else, and its mark on American politics since it became the first signatory to the Constitution 225 years ago has been as negligible as the state is small.

An exception was Senator John J. "Honest John" Williams, a chicken farmer and Republican who earned the moniker "The Conscience of the Senate" because of his investigations into various improprieties on President Johnson's watch. (Lyndon, not Andrew.)

Then there is Senator Joseph R. Biden Jr., whose national political career had a beginning both improbable and tragic but has been distinguished, despite a few pratfalls, primarily because of a grasp of world affairs not seen on the Democratic side of the aisle since the passing of the late great Mike Mansfield, the Montana Democrat and man ultimately responsible for Biden becoming Barack Obama's running mate and possibly the next vice president of the United States.

* * * * *
My earliest recollections of Joe Biden are from summers at Rehoboth Beach, where our families vacationed. (Rehoboth was once charming and marketed itself as "The Nation's Summer Capital," but it never had a great beach and the community itself has been carpet bombed beyond recognition by developers.)

Anyhow, I would be lying if I said that young Joe seemed destined for politics, let alone greatness. He had little to distinguish himself from the teenaged crowd that I aspired to be a part of beyond having overcome a bad stutter to become a handsome and loquacious babe magnet who happened to have the nicest parents in the world.

While I and a lot of other people were surprised in 1972 when the now 29-year-old lawyer and county councilman took on two-term Senator J. Caleb Boggs, a former congressman and governor, the result was Delaware at its independent minded finest.

Ours is perhaps the ultimate purple state, having once elected a governor and lieutenant governor from different parties, as well as unceremoniously bounced an incumbent DuPont family gadzillionaire senator when senators were first popularly elected and not appointed by state legislatures.

As five-term Senator William Roth was to learn to his dismay in 2000, incumbency goes only so far in Delaware and voters recognized that Roth, who replaced John Williams, had been phoning it in for years. Ditto for Boggs, whom Biden beat by 3,100 votes despite the Nixon landslide in Delaware and nationally.

* * * * *
In 1972, the intersection of Limestone and North Star roads was pretty much out in the middle of nowhere. Today, suburban sprawl necessitates six traffic and four turn lanes, but back then there was only a small liquor store and a mushroom farm at the southeast corner and farm fields on the others. I seldom had to wait long to cross Limestone whether on my bike or when I was old enough to drive my parents' cars.

Five weeks after Biden's improbable victory, school teacher wife Neilia (bottom photo) and their children, Beau, 3, Hunter, 2, and Naomi, 1, were crossing Limestone Road after doing some Christmas shopping. Their car was T-boned by another driven by a drunk driver, killing wife and daughter and critically injuring the boys.

All of a sudden a political career seemed unimportant to the bereft Biden, who told his family and Democratic leaders that he would relinquish his Senate seat in waiting.

But Senate Majority Leader Mansfield -- who was to become Biden's mentor -- was relentless.

"He called the hospital every day to tell me he needed me in the Senate," Biden recalled later. "Mansfield told me I owed it to Neilia to be a senator. My wife had worked too hard for me to kick it away. 'Give me six months, Joe,' Senator Mansfield kept saying. So I agreed. Six months."

Biden was sworn in at the hospital bedsides of Beau and Hunter and has commuted home from Washington every work night for the last 36 years.

* * * * *
While Biden has lost none of his loquaciousness (some would call it logorrhea) and his penchant for the ill-timed remark was considered a detriment even when he was on the short list as a potential Obama running mate, he has gotten at least 60 percent of the vote since the 1972 squeaker, faces only token Republican opposition this year and remains extremely popular back home despite his generally liberal views in a state that is staunchly moderate.

Biden wears his working class roots proudly (and happens to be one of the least wealthy members of the Senate), is a pro-choice Catholic, has balanced mundane constituent services such as getting a Korean War-era medal for the father of a friend with an outspoken but nuanced opposition to the Iraq war and trips to overseas hot spots, most recently Georgia.

He can be seen in the stands at University of Delaware football games on many fall weekends, and probably knows the names of half the people in the stadium. And after years of trying, he's finally got the hair weave thing down.

Out of the tragedy of 1972 has come opportunity and a timing that Biden never could have anticipated after two unsuccessful presidential runs.

In 2008, world affairs expertise, policy-making chops and a bite to back up his bark is more important to a Democratic ticket led by a younger and less experienced politician than the hoary view that a vice presidential running mate must come from a populous state -- and better yet a swing state -- to give the guy at the top a bump.

While many pundits will damn the babe magnet on the beach of my youth with faint praise and some will complain that he is the antithesis of the change that Barack Obama advocates, he has worked tirelessly for little Delaware and big America, and Obama could not have done better.

Bottom photograph: Bettmann/Corbis
Posted by Shaun Mullen at 2:54 AM
Email ThisBlogThis!Share to TwitterShare to FacebookShare to Pinterest

Shaun, it is a good day for America with Biden as Barack's running mate. The fantasy that most excites me is this. Joe is an expert in Constitutinal Law. He knows how Bush/Cheney and company have violated the Constitutional rights of Americans, Joe will ensure those rights are restored, if elected. he will pursue the legality of the Bush Administration and will most likely advise against any pardon for Bush & Cheney in any criminal negligence suit or prosecution of crimes following their departure from office. Joe understands the importance of defending the Constitution. I know it's just a fantasy but I want to relish it for a while. Pardoning Bush will be the first request Obama faces when he becomes President. My hope is that Biden stops that notion dead in the tracks.

Joe Biden has the kind of liberal credentials that make me believe that someone in Washington is actually on the same page with me... I was starting to doubt that, frankly.

As we know, when Biden was asked not long ago if he would run as VP, he said something like "of course he would, who wouldn't want to help elect Barack Obama and do something historic." I don't have the exact quote, sorry, but it was definitely in the direction that Biden wanted to be part of something bigger than himself. Biden is honest and sees the big picture.

By contrast, can the Clintons be so selfless and magnanimous? This next week puts the Clinton legacy squarely on the line.

Pro-choice Catholic from Archmere. Now, that's a moniker. God help us, if it's not an oxymoron. Do they give him Communion in Delaware?