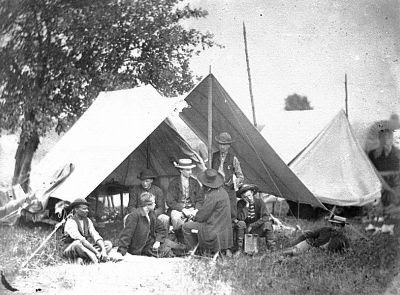 Although he was president over a century before widespread use of the computer and the advent the Internet and email, Abraham Lincoln was the first technology president.

Arriving in Washington at the dawn of the age of the telegraph, Lincoln embraced this new technology of instantaneous communication with a passion and used it not just to communicate with his generals in the field during the Civil War, but to bend them to his will. In fact, while Lincoln kept no diary or other record, the greatest insight into the keen mind and innermost thoughts of our greatest president comes from the

These messages range from the mundane to the historic.

When wife Mary Todd wired him from New York asking for cash, she concluded with a perfunctory:

Lincoln replied that a check was in the mail and then commented on his own-well being in the depths of the war:

"Tell Tad the goats and father are very well -- especially the goats."

When the insubordinate General George McClellan demanded more troops and lectured him on the secondary role government should play in military affairs," Lincoln responded:

I shall aid you all I can consistently with my view of due regard to all points.

He added an exasperated footnote:

And last I must be the Judge as to the duty of the government in this respect.

Lincoln reconsidered the footnote before handing the message to a clerk for transmission and scratched it out, concluding despite his great frustration there was a better time to rebuke McClellan.

That time came a few months later when Lincoln saw a telegram from McClellan to another general that claimed his own failure to pursue the fleeing Confederates after the Battle of Antietam was due to the poor condition of his horses.

I have just read your despatch about sore tongued and fatiegued horses -- Will you pardon me for asking what the horses of your army have done since the battle of Antietam that fatigue anything?

In 1861, the telegraph had been embraced by banks and railroads, but not the government that had grudgingly endorsed it. (Legislation authorizing the use of Morse code had passed the House by only three votes because the idea of sending messages by sparks of electricity was incomprehensible to most people.)

There was no telegraph line in the White House, let alone the adjacent War Department building, and messages typically were sent through the civilian-run Washington Telegraph Office.

It wasn't until the following year that the U.S. Military Telegraph Corps was established and the War Department was wired, in effect becoming the first Situation Room as Lincoln would walk over to the telegraph clerk's desk where carbon copies all all incoming telegrams were filed, and setting aside the telegrams he

"Lincoln's greatest use of the telegram was to extend his eyes and ears, not just his voice," says historian Tom Wheeler. "This reading of all of the telegraph traffic gave him a picture of what was going on and gave him the ability to insert himself where necessary to provide his input."

That input certainly was necessary in August 1864 with Confederate armies holding the upper hand and one even threatening Washington, draft riots in northern cities and the likelihood of a second Lincoln term growing slimmer by the day.

It was on one of Lincoln's forays to the telegraph clerk's desk that he read a wire from General Ulysses S. Grant, who was stalled outside of Petersburg, to General Henry Halleck expressing

concern over conditions on the front and back home. Although the telegram wasn 't addressed to him, the president immediately sent Grant a wire:

I have seen your dispatch expressing your unwillingness to break your hold where you are. Neither am I willing. Hold on with a bulldog grip and chew and choke as much as possible.

As Wheeler notes, that was as good as walking into Grant's headquarters, sizing up the situation and giving the general an encouraging pat on the back.

Grant later recalled his telegrapher handing him the wire, chuckling as he read it and telling those around him, "The president has more nerve than any of his advisers."

Based in part on a C-SPAN interview with Tom Wheeler,
author of Mr. Lincoln's T-Mails: The Untold Story of How
Abraham Lincoln Used the Telegraph to Win the Civil War
Posted by Shaun Mullen at 1:05 AM
Email ThisBlogThis!Share to TwitterShare to FacebookShare to Pinterest