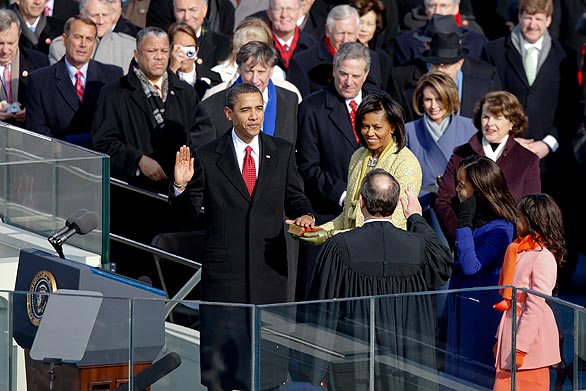 Although no one could have imagined it a few months ago, there was a certain inevitability -- and inherent in that a poetic justice that vanquished improbability -- to the historic events in Washington, D.C., yesterday.

Barack Hussein Obama would not have been sworn in as the 44th president of the United States had the Supreme Court not stolen the 2000 election for George Bush, had the smirking frat boy from the Texas oil patch not been so spectacularly bad a leader, had the economy not belly flopped, and had the relatively inexperienced senator from Illinois not run on a mantra of hope and change that galvanized an electorate desperate to turn America back from the dark side.

The profound racial significance of the day, let alone the diversity of the 1.5 million people thronged on the National Mall under azure blue skies, was eclipsed by the new president's dense but stirring call to action in an inaugural address that ranks with Abraham Lincoln's in 1865,

The speech was appropriately short on flowery phrases, but very much of the moment:

"What the cynics fail to understand is that the ground has shifted beneath them. That the stale political arguments that have consumed us for so long no longer apply. The question we ask today is not whether our government is too big or too small, but whether it works -- whether it helps families find jobs at a decent wage, care they can afford, a retirement that is dignified." 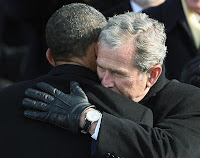 And a barely veiled denunciation of the Age of Bush as the outgoing president sat just a few feet away, his desire -- and ours -- for him to be out of power and out of Washington palpable:

"As for our common defense, we reject as false the choice between our safety and our ideals. Our Founding Fathers, faced with perils we can scarcely imagine, drafted a charter to assure the rule of law and the rights of man, a charter expanded by the blood of generations. Those ideals still light the world, and we will not give them up for expedience's sake."

Some random thoughts on the occasion:

* In contrast to 2004 and 2004, and for that matter self-indulgent inaugurals in general, it was a day for Americans and for people everywhere. And how wonderful to be talked to with respect and not talked down to with disdain.

* The transformational feeling of the day aside, of all the promises that the young president made, creating a post-partisan Washington may be the most difficult.

* With The Decider finally gone, there was a belated hardening of the views of television pundits who, among other things, talked about the

administration's endorsement of torture in atypically blunt terms, with MSNBC's Chris Matthews going so far as to compare the Bushes to the Romanovs.

* But surprises of surprises, there were no last-minute Bush pardons.

* As symbolism goes, one of the new administration first actions was huge: Ordering military prosecutors to suspend legal proceedings at Guantánamo Bay, the flagship of the Rumsfeld Gulag, while the stinking mess that ha shamed America in the world's eyes is reconsidered.

* With the Bushies, everything was non-negotiable. As Obama made clear, principles are non-negotiable and will not be compromised for the sake of expedience.

* While an economy in crisis with millions of Americans out of work is being touted as Obama's greatest challenge, great dangers lurk abroad.

* Can't John Roberts get anything right? Although misplacing an adverb is the least of the chief justice's problems.

* With Obama warning that the Wall Street of old will not be tolerated, financial markets tanked as if on cue with the Dow down more than 4 percent and taxpayer welfare queens Bank of America, J.P. Morgan Chase and Citigroup sinking to new lows.

* What can you say about the image of Dick Cheney in a wheelchair? How about Dr. Strangelove?

* There was much self congratulation after 9/11 that America had grown up, which made Obama's reminder that "in the words of scripture, the time has come to set aside childish things" so appropriate.

* The speech contained an explicit challenge to terrorists and an implicit one to the Arab street: We will listen to you and we will work with you.

* Questions about whether Obama was black enough seem so silly now, don't they?

* John Coryn's incivility over the Hillary Clinton nomination is a reminder that right-wing Republicans remain as untethered as ever.

* Ted Kennedy is an extraordinary trouper.

* And the Obamas are great dancers.

Posted by Shaun Mullen at 2:52 AM
Email ThisBlogThis!Share to TwitterShare to FacebookShare to Pinterest