'We Are At Best Only His Step-Children' 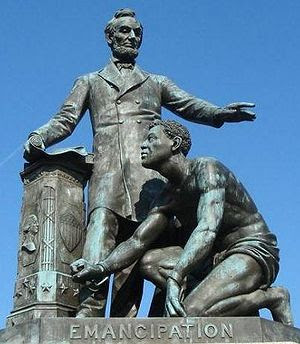 One of the greatest speeches -- if not the greatest -- on Abraham Lincoln was delivered in 1876 by the great black abolitionist Frederick Douglass at the dedication of the Freedman's Monument in Washington, D.C., which had been substantially built with the pennies of freed slaves.

Douglass, who knew Lincoln personally, brilliantly captured the complexity of the relationship Lincoln had with blacks and blacks with him in the speech, "Expression of Gratitude for Freedom." Some excerpts: 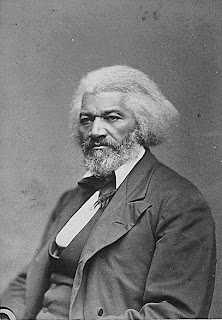 It must be admitted, truth compels me to admit, even here in the presence of the monument we have erected to his memory, Abraham Lincoln was not, in the fullest sense of the word, either our man or our model. In his interests, in his associations, in his habits of thought, and in his prejudices, he was a white man.

He was pre-eminently the white man's President, entirely devoted to the welfare of white men. He was ready and willing at any time during the first years of his administration to deny, postpone, and sacrifice the rights of humanity in the colored people to promote the welfare of the white people of this country. . . . . He was willing to pursue, recapture, and send back the fugitive slave to his master, and to suppress a slave rising for liberty, though his guilty master were already in arms against the Government. The race to which we belong were not the special objects of his consideration. Knowing this, I concede to you, my white fellow-citizens, a pre-eminence in this worship at once full and supreme. First, midst, and last, you and yours were the objects of his deepest affection and his most earnest solicitude. You are the children of Abraham Lincoln. We are at best only his step-children; children by adoption, children by force of circumstances and necessity.

When, therefore, it shall be asked what we have to do with the memory of Abraham Lincoln, or what Abraham Lincoln had to do with us, the answer is ready, full, and complete. Though he loved Caesar less than Rome, though the Union was more to him than our freedom or our future, under his wise and beneficent rule we saw ourselves gradually lifted from the depths of slavery to the heights of liberty and manhood; under his wise and beneficent rule, and by measures approved and vigorously pressed by him, we saw that the handwriting of ages, in the form of prejudice and proscription, was rapidly fading away from the face of our whole country; under his rule, and in due time, about as soon after all as the country could tolerate the strange spectacle, we saw our brave sons and brothers laying off the rags of bondage, and being clothed all over in the blue uniforms of the soldiers of the United States.

Had Abraham Lincoln died from any of the numerous ills to which flesh is heir; had he reached that good old age of which his vigorous constitution and his temperate habits gave promise; had he been permitted to see the end of his great work; had the solemn curtain of death come down but gradually -- we should still have been smitten with a heavy grief, and treasured his name lovingly. But dying as he did die, by the red hand of violence, killed, assassinated, taken off without warning, not because of personal hate -- for no man who knew Abraham Lincoln could hate him -- but because of his fidelity to union and liberty, he is doubly dear to us, and his memory will be precious forever.

Click here for the text of the entire speech.