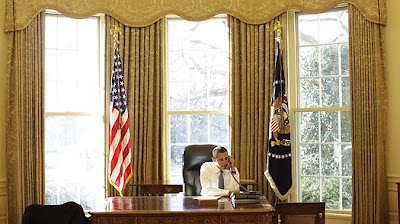 OHMYGAWD! HE'S NOT WEARING A SUIT COAT
Like a lot of people, I was so caught up in the emotion of Inauguration Day that after eight hours of being glued to the tube I found it difficult to sort out and express my thoughts. So I slept on a lumpy pillow of words and images, got up in the middle of the night and hammered out a piece that noted there was a certain inevitability to the historic events in Washington, D.C. on Tuesday. 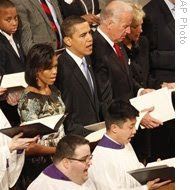 That angle was true enough, if a bit quixotic. But after going back to sleep and waking a few hours later to the same brilliant azure blue skies that had smiled down on the new president as he took the oath of office, I realized that President Obama's inaugural address was even greater than I had thought.

This is because the address was not an exercise in soaring rhetoric, although it did have some memorable lines, but rather a fairly detailed set piece for the hard work ahead, as well as damning renunciation of a time of darkness now passing that should have made George Bush, who of course was sitting just a few feet away, blush in embarrassment had he been capable of even a modicum of humility. But then he probably wasn't even paying attention.

Obama already is drawing fire for seeming to be unwilling to make trade-offs in the fine Washington tradition of mutual backscratching, but I predict that he will be a masterful negotiator who can be pragmatic while remaining principled.

This quaint concept used to be called "governing." It is long past time that it come back into fashion even as wearing a suit coat for all Oval Office photo ops goes out of fashion. 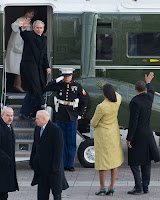 The crudest manifestation of this, which Obama addressed head on in his speech, was that in its draconian view America could not be both secure and free because being secure required sacrificing freedoms.

Being both absolutely secure and absolutely free is not possible, of course. But until the 9/11 attacks were used as a pretense for the administration's imperial power grab, America had done a pretty decent job over the past 225 years of balancing both with passing exceptions that were corrected such as when Lincoln suspended habeas corpus during the Civil War, and Roosevelt interned 120,000 Japanese-American citizens.

Abandoning torture as an instrument of policy, recommitting to the Geneva

Conventions and dismantling the military tribunal system will be among the easier tasks that Obama faces. Restoring civil liberties -- which is to say giving Americans back certain freedoms that they were forced to relinquish in obeisence to the royal court -- will be somewhat more difficult because the coldly-calculated abrogation of them was codified by a compliant Congress.

* * * * *
Taking the You Can Only Have One Or the Other meme to a logical absurdity, which of the following is more important: Bush leaving office or Obama taking office?

For argument's sake, and it is an admittedly silly one,

my inclination is to go with Obama, but I did take a certain satisfaction in the "Na Na Hey Hey . . . Goodbye" singalong on the Mall even though it was in bad taste. But then so was waterboarding.

* * * * *
During those last eight years, the truth was a universal wrench to be dialed hither and yon to suit the political and propaganda expedient

of the moment. Compare that to Obama's speech, whom as an apolitical colleague remarked, "was the truth, the whole truth and nothing but the truth."

In that respect, the speech was rather conservative and in no way reflective of the hair-on-fire left wing zealotry of which he was accused by hair-on-fire right-wing zealots during the campaign.

Obama and Supreme Court Chief Justice John G. Roberts stumbling over each others words as the oath of office was administered on Tuesday and having to redo the oath yesterday is ironic, as well as a portent: Obama is the most powerful man in the world, but in some respects Roberts is the most powerful man in America and may well end up being the greatest obstruction to the new president's purposeful principled pragmatism.

I saw his speech live and then on replay later. After I got to work Tuesday evening I read some of the responses to it from all the usual suspects. Then I read a transcript, twice. Keeping in mind Bush was 3 feet away, I can't ever recall hearing such a repudiation and verbal assualt on an outgoing president and all his policies. I think now, after a little time to digest it, I'd put it at the very top of his speeches, as impressive as some of them were.