When Turnabout Is Fair Play 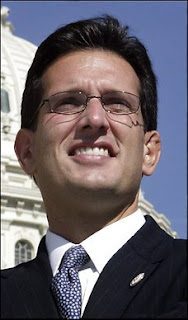 There are at least 30 Republicans who voted against the stimulus bill who represent districts that Barack Obama carried in November, so it's likely that the expected Democratic TV attack-ad pushback will target them. And only fair, which is why the GOP has its collective undies in a knot.

House Republican Whip Eric Cantor (photo) is expected to issue a statement contending that Obama's promise to "put an end to petty politics" is "threatened" as the White House and their allies "are making political threats rather than crafting a bipartisan economic stimulus plan."

Meanwhile, Senate Republicans in three states that Obama won -- Pennsylvania, Ohio and Nevada -- are targets of a radio ad campaign that asks if they are with Obama or Rush Limbaugh.