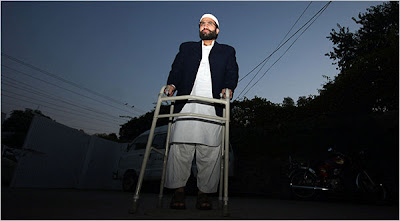 THIS MAN WAS TORTURED AT GITMO, HIS HEALTH DESTROYED

The Pity Party, formerly known as the Republican Party, has so completely lost its way that its first pushback of consequence against Barack Obama in the opening days of his presidency is not over fiscal responsibility or health-care reform, but torture.

Standing up for torture would seem to be an odd choice since the Bush administration's embrace of Nazi-like interrogation techniques gave the U.S. an enormous black eye around the world and played into the hands of Al Qaeda and other terror groups. But there is a fear among some Republicans that Bush administration bigs might be prosecuted for their part in the torture regime.

So by holding up approval of the nomination of Attorney General-designate Eric Holder in the vain hope that they can blackmail the White House into promising to not go after the Donald Rumsfelds, David Addingtons and John Yoos, Republicans led by John Cornyn (photo, upper right) managed the neat trick of acknowledging that what these men and others did was possibly 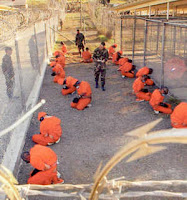 criminal while demanding that their criminality be excused.

Cornyn claims that the Military Commissions Act immunizes wrongdoers. It does -- but only to a point.

In signing executive orders ending the CIA's secret overseas prisons, banning torture and closing Guantánamo Bay, President Obama not only makes good on a campaign promise, but he begins to turn America back from the dark side.

This acknowledgment that what the Bush administration did was not only illegal, but played into terrorists' hands cannot be emphasized enough.

instead of creating their own. This was not just morally repellent, but stupid: In addition to sacrificing a whole lot of good will throughout the world, it made our actions a lot more predictable, and a lot easier to take advantage of.

"Al Qaeda could never have destroyed our commitment to liberty, human rights, and the rule of law by itself. It could only hope that we would respond unthinkingly and do the dirty work ourselves. We obliged them, and in so doing did a lot more damage to ourselves than Al Qaeda could ever have dreamed of doing."

THANKS A HEAP, SAUDI ARABIA

Ed Morrissey and other right-of-center pundits are, of course, having cows over Obama's walkback from the terror regime and are using the news that former Guantánamo detainee Ali al-Shihri has emerged as the deputy leader of Al Qaeda's Yemini branch as proof that the detention center should not be closed.

There are a couple of problems with this view: First, it was inevitable that some bad guys would go free. Second, even the Bush administration didn't have enough on Al-Shiri to continue holding him. Third, as a Saudi he was released to Saudi Arabia, which was home to most of the 9/11 hijackers. Finally, the Saudis were so inattentive after Al-Shiri "graduated" from a jihadist rehabilitation program that he showed up in Yemen. 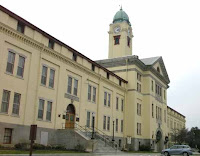 About 250 detainees will have to be incarcerated on the U.S. mainland after Guantánamo is closed, and the same Republicans who are standing up for torture are crying blue-blooded murder over the possibility that these dregs, some of whom are indisputibly dangerous, will end up in their back yards.

While I think that Captain Ed's house would be perfect place for them since Michelle Malkin says hers isn't available, the logical place is the military penitentiary at Fort Leavenworth, Kansas, which is where the worst of the worst uniformed offenders have been imprisoned for the last 170 years.

The only objection of consequence from residents who live near Fort Leavenworth seems to be that it will further cement the community's reputation as a prison town. (Sigh.)

Lost in all the smoke is that there are two fricking million people in U.S. prisons who don't seem

to be especially escape happy, while there already are a bunch of terrorists in a mainland prison -- the federal Supermax lockup in Florence, Colorado, so what's the big deal?

And by the way, Captain Ed, Obama intends to put the bad guys on trial, only do it legally.

Any remaining pretense that Guantánamo detainees were not tortured has been effectively ended by Susan J. Crawford, who was the top Bush administration official overseeing the military tribunal system. She now acknowledges that at least one individual -- Mohammed Al-Qahtani -- was indeed tortured.

"We tortured Qahtani. His treatment met the legal definition of torture. And that's why I did not refer the case for prosecution."

That treatment was a torture cocktail of horrifying proportions: A combination of five months of isolation in solitary confinement, 54 days of sleep deprivation, forced standing, actual violence, threats of violence that included the use of dogs, and humiliation, including being forced to urinate on himself, forced sexual contact with female interrogators and being led around on a leash.

No wonder the Republicans are worried.

Top photograph by Akhtar Soomro for The New York Times

Posted by Shaun Mullen at 6:34 AM
Email ThisBlogThis!Share to TwitterShare to FacebookShare to Pinterest