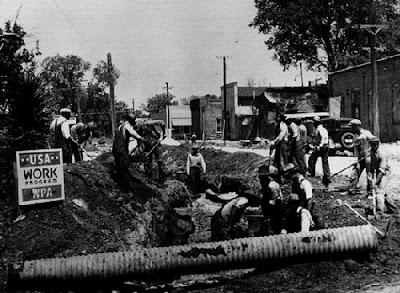 There's a great shakeup going on in American politics, that has roots in the 1960s but seems to be accelerating. For better or worse, the parties seem to be completing a massive cross-over from where they stood at the time of the New Deal. The Democrats are becoming the party of white-collar workers (boosted by blacks and Latinos from all classes), dominating cities and now strong in older suburbs, while the Republicans are increasingly the party of blue-collar whites, especially in the Heartland and the Deep South (where the GOP's appeal includes more affluent folks.)

So the Wills, the Brooks, the Kaurthammers of the world are increasingly looking to side with their social class rather than their political heritage. That's why you wouldn't see a radio rabble-rouser like a Rush Limbaugh or a Sean Hannity at the Obama gathering. And as America's economy, for better or worse, becomes more white-collar each passing year, the numbers must look grim for the GOP. 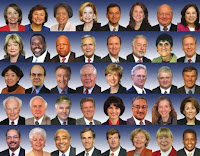 I think it is obvious that rank and file Democrats have no idea how much power they have. What's less obvious is that the elected Democrats cannot yet fathom how much power they have. For at least 14 years Democrats have been toiling in the minority trying to come up with policy prescriptions that could pass in Tom DeLay's House and Bill Frist's Senate. They put in all this work and now we can pass the fruit of their labors. Too many progressives want to pass the legislation they came up with in a GOP-dominated era because that's what they've been working on for a decade or more. This is totally understandable. But the problem is that we have the votes to pass much better stuff than any of these think tanks ever dreamed of passing over the last decade-plus.

We've entered a progressive era but most of the hard work by wonks was thought through in a Republican era. Don't worry. We'll learn. But actual progress will be slower than it should be because we were not prepared.

Late next week, or soon afterward, four million American children, whose health care has been held hostage by George W. Bush's deep sympathy for the profits of private insurers, will finally get the coverage Congress has been trying to give them for almost a year and a half.

. . . the House passed an expansion of the State Children's Health Insurance Program (SCHIP), which now goes to the Senate for quick approval by the new president, who greeted the news thus:

"In this moment of crisis, ensuring that every child in America has access to affordable health care is not just good economic policy, but a moral obligation we hold as parents and citizens. That is why I'm so pleased that Democrats and Republicans in the House of Representatives came together to provide health insurance to over ten million children whose families have been hurt most by this downturn. This coverage is critical, it is fully paid for, and I hope that the Senate acts with the same sense of urgency so that it can be one of the first measures I sign into law when I am President."

The man has been saying goodbye for so long, he's come to resemble one of those reconstituted rock bands that have been on a farewell tour since 1982. We had exit interviews by the carload and then a final press conference on Monday, in which he reminisced about his arrival on the national stage in 2000.

I think I speak for the entire nation when I say that the way this transition has been dragging on, even yesterday does not seem like yesterday. And the last time George W. Bush did not factor into our lives feels like around 1066.

I hope I never find myself in the same room as George W. Bush because I love my shoes and it would be a shame to lose one up his ass. I just can't handle much more of this "legacy tour" of his. A few years ago he was asked if he had made any mistakes and he couldn't answer the question. Now he decides to let us know that "Mission Accomplished" might not have been a good idea. Oh really? Turning the war into a public relations opportunity wasn’t a good idea? Announcing mission accomplished when thousands of soldiers would continue to die isn't just a mistake you jackass. It's unforgivable.

So I have a legacy for you Mr. President. When you go to war with other people's children, you need to take it seriously. Because when you are President and you take your country to war, they ALL become YOUR children.

January 20, 2009 just can’t get here fast enough. Everyone should have a bowl of soup that day and let the healing begin.