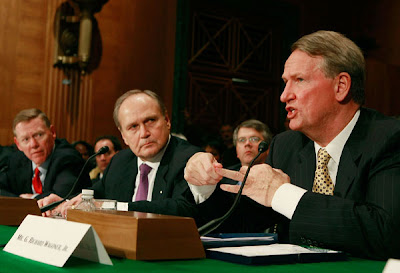 Having pretty much used up my outrage quota for the year, if not the decade, I don't have much left over for the scam that General Motors is trying to pull off: Having stubbornly refused to trim its bloated and boring product line and commit to making innovative automobiles even as it hurtled toward bankruptcy, it is pleading for $18 billion in taxpayer bailout money because it is finally ready to get serious about doing what it should have done years ago. Honest. But to add insult to injury, the very guy who has driven GM into a deep hole will remain behind the wheel.

I speak, of course, of GM CEO Rick Wagoner, who made a show of eating humble pie in an encore appearance before a Senate committee yesterday in the first of two days of congressional hearings after motoring to Washington in a thrifty hybrid (photo, above right) instead of one of the gadzillion-dollar executive jets that he and his counterparts at Ford and Chrysler had winged in on for their initial appearances last month, an exercise in hubris that was a public-relations disaster.

While the auto execs asked for more money this time -- $34 billion instead of $25 billion -- they largely abandoned the Apocalypse Now pitches they had made in November and told lawmakers what they wanted to hear -- that they would focus on building fuel-efficient cars.

And so with jets out and humility in, bailouts -- or an alternative scheme like tapping into the $700 billion economic stabilization program -- seemed to be all but a done deal at the start of the day with congressional Democrats in control and the specter of "Who Lost Detroit?" hanging over their heads. But after the auto execs endured hours of harsh questioning, the big question was whether the Dems will be able to muster the votes before the clock runs out on the lame-duck Congress, let alone after the New Year.

As it is, Chrysler is almost sure to go bye-bye, GM's fate is hanging in the balance and only Ford appears to have the resources to gut it out until sales begin to pick back up from their present sorry state: Chrysler's down 47 percent in November, GM 41 percent and Ford 31 percent.

Nobody has asked me or other taxpayers if it's okay to blow our hard-earned ducats to rescue these dinosaurs, and indeed bailouts are deeply unpopular with the public. But what really matters is that the financial markets and bondholders already pretty much view the Big Three as being kaput although the automakers are fighting tooth and nail to avoid having to file for Chapter 11 protection because of the probability that even fewer people would buy cars them if they were bankrupt.

Meanwhile, GM's bonds are worth 29 cents on the dollar and its stock closed yesterday at a pathetic $4.11, losing 57 cents despite the bailout happy talk.

Chrysler is asking for $7 million in bailout dough, a mere pittance compared to the $18 billion that GM says it needs. (Ford has provisionally requested $9 billion, but says it may not be needed because it is well along on its cost-cutting strategy and might break even by 2011.)

As it is, Chrysler's product line is notably long in tooth and innovative only if you consider butt ugly retro designs (photo, right) to be forward looking. And having been dumped by Daimler, it is now owned by Cerberus Capital Management, a private-equity firm that won't put any more money into Chrysler and whose strategy appears to be keeping it on life support until some fool comes along and buys all or part of it.

It is estimated that GM will burn through at least $14 billion in 2009 and would have to turn the corner in 2010, which is highly unlikely and means it will need even more money to survive even if it goes on the diet that experts have been prescribing for years and dumps or downsizes Pontiac and Saturn and concentrates on four core brands -- Chevrolet, Cadillac, Buick and GMC.

The likely demise or sell off of Saturn is bitterly ironic.

GM created Saturn to be the leaner kind of car company it now promises that it will become, and succeeded admirably. The United Auto Workers gave up many of its usual contract goodies, a network of friendly, haggle-free dealers was created and beginning in 1990 the brand's small, fuel-efficient cars flew out of showrooms.

But Wagoner starved the brand and sales plummeted, only to begin to recover recently because its lineup consists largely of rebadged Opels from Germany.

Speaking of the UAW, it announced prior to the big Three dog-and-pony show on Capitol Hill that it is willing to make major contract concessions -- and concessions is the dirtiest word in a union member's vocabulary -- to keep GM and Chrysler afloat.

In the dumbest idea of the day, Wagoner and Chrysler CEO Robert Nardelli said they

would be amenable to a merger, although Nardelli conceded his job would be the first to go. Let's see: Combine two bloated and unprofitable products lines as a way to salvation. Pretty stoopid, eh?

Wagoner tepidly acknowledged that he and other auto execs have made mistakes over the years, but that "forces beyond our control" had also pushed Detroit to the brink. That is bullshit, because in the end the most damning indictment of the Big Three is the fact that the U.S. auto industry, although currently experiencing a recession-driven downturn, is doing quite well, thank you.

It's just that GM, Ford and Chrysler haven't kept up.

You don't give a homeless man cash, he'll just get drunk. But if you give him some food to chew on, he'll have renewed energy.

I say let them (once known as the big 3) learn how to survive on the streets again. Maybe hunger will give them a new view on the automotive world.