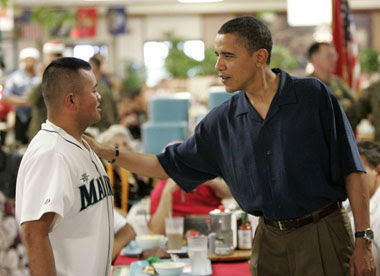 Hoping for less sweets in school-lunch programs and perhaps even an organic vegetable garden on the White House lawn, food activists realize that, for the most part, a President can push the cause of good eating by example.

While Bill Clinton scarfed Big Macs, Obama has been his polar opposite. "He's remarkably careful," says a campaign caterer. "He doesn’t like sweets that much but fish, fish, fish, some chicken and things with spice," like chicken pizette with fontina cheese, grilled onion and sweet and hot peppers.
-- ROBERT STEIN
Every time a new medium arises, a new group of avatars arises with it, assuring us of the wondrous effects it will produce for our democracy. . . . Now we're hearing the same thing about the blogosphere.

As he prepares to step down as DNC chair in January, giving way to Obama's handpicked successor, [Howard] Dean has cemented his legacy as a prophetic, if underappreciated, visionary in the party. When pundits saw the country hopelessly divided between red and blue -- with the blue part of the map restricted to the West Coast, the Northeast and an increasingly embattled Midwest -- Dean argued that the party had to compete everywhere. After the epic meltdown of his presidential campaign, punctuated by the endlessly looped "Dean scream" after the Iowa caucus, Dean took one of the most thankless jobs in Washington and turned it into a laboratory for one of the most exciting experiments in modern Democratic Party history. He radically devolved power away from Washington by cultivating a new generation of state political organizers and lending support (and money) to long-forgotten local parties, bucking the Beltway establishment and enabling grassroots activists. He rehabilitated his party, and his image, in the process. Dean's fifty-state strategy, as it came to be known, "fertilized the landscape" for Obama's fifty-state campaign, Brazile says. If his strategy is extended during the Obama administration, we’ll find out what a true fifty-state party looks like.

-- MATTHEW YGLESIAS
The White House explained President Bush's Christmas Eve pardon withdrawal for Isaac Toussie as a simple matter of directing "the Pardon Attorney not to execute and deliver a Grant of Clemency." But a review of the relevant case law shows that the president may have just committed a major Constitutional foul. 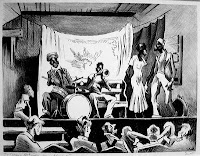 I suppose the real question is will there ever be agreement among everybody on just what is satire and what is racism?

The answer is not as long as liberals see playing the race card as the political advantage it is.

The latest blow up involves a Rush Limbaugh parody that first surfaced on his show during the campaign. "Barack the Magic Negro," an edgy satire of Obama’s celebrity and popularity with white voters that was written by Paul Shanklin and played numerous times on Rush’s show.

-- RICK MORAN
A year on, and despite the consensus media narrative that blames the Taliban, who ordered Benazie Bhutto's death is still a mystery and no-one in Pakistan's corridors of power seems much interested in solving it. (Not even her husband.)

It'd be nice to erase the Bush years from history, but even if we could do that we'd find that the seeds of disaster were germinated in the Clinton years and planted during the late 20th-Century. That history is beyond the scope of this essay, but it's important to remember that Bush may have driven us off course but we were headed down the wrong road to begin with.

. . . Yet, respect and love for this country doesn't mean loving it for right or wrong. It means a dedication to the proposition that wrongs can be righted, eventually, by following the principles of our system. That is why Glenn Beck's kind of patriotism seems like the opposite of love. His love is the love of the besotted. It's all surface-level and fantasy. One day Glenn Beck will wake up and discover that his princess is a pumpkin or his prince is a frog. But, that too, will be a fantasy because pumpkins and frogs are worthy of love, warts and all.

Unknown said...
This comment has been removed by a blog administrator.
11:02 AM