Quotes From Around Yon Blagosphere 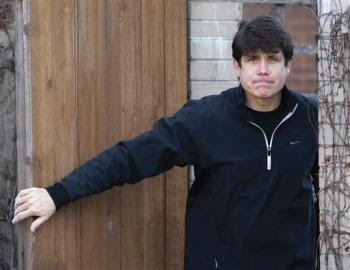 Gubernatorial thuggery in Illinois won't prompt Americans to throw their shoes at Barack Obama (give George W. Bush credit, the guy has good reflexes), but the president-elect risks losing some political luster if he fails to speedily address nagging questions about the extent and nature of any conversations that his aides may have been conducted with the corrupt hustler who aimed to sell Obama's vacated Senate seat.

Last week, while responding at a news conference to questions about the Rod Blagojevich scandal, Obama stated: "What I want to do is gather all the facts about any staff contacts that I might – may have – that may have taken place between the transition office and the governor's office," and share these facts publicly, "over the next few days."

He made that promise on Thursday morning. At that point, he had already been silent for two days; the scandal had gone national on Tuesday morning, when Blagojevich was cuffed at home, on charges of conspiracy and soliciting bribes. This means that the Obama people have now declined for nearly a week to detail the extent and nature of their discussions with the governor about that vacant Senate seat.

Even if Obama is innocent of all wrongdoing – indeed, the federal complaint against Blagojevich offers zilch evidence of any Obama malfeasance – this six-day silence isn't doing him any good, at least on the perception front. Unless or until Obama supplies "all the facts about any staff contacts,” his partisan opponents will seek to broadly tar him with the Blago brush, and the more vigilant members of the media will keep re-framing the key unanswered questions. 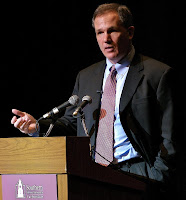 If [prosecutor Patrick] Fitzgerald had waited to catch Blagojevich with a smoking gun, he would have had an airtight case, but the US Senate would have had a replacement for Obama who, directly or indirectly, had bribed his or her way there.

[T]his morning on MSNBC there was a lengthy discussion of Obama's involvement in Blagojevich's corruption. Of course, there was no evidence of any involvement on Obama's part. Nor, despite this being a news channel, was there any original reporting of any kind whatsoever. There was, however, a ton of time spent criticizing the Obama campaign's PR strategy with regard to this issue — the suggestion being that had Obama adopted a better PR strategy, then people wouldn't be on television making evidence-free guilt-by-association accusations against him.

This strong me as odd. The people making the accusations kept acknowledging that they had no evidence. One might think that communicating to television personalities the fact that there was no evidence of wrongdoing on Obama's part would constitute a good PR strategy. Given that they knew there was no evidence of wrongdoing, they should have ceased implying that there was wrongdoing. But they didn’t do that at all. Not, I would submit, because of any failings on Obama's part, but because Joe

Scarborough, Mika Brzezinski, John Heileman, Mark Halperin, and Pat Buchanan don't care at all about the accuracy of the impression their coverage gives.

Eventually, they got around to the idea that Obama hadn’t criticized Blagojevich in sufficiently harsh terms and that the reason for this was that Blagojevich has unrelated dirt on Obama and/or Rahm Emmannuel. Several of them deemed that likely, though none of them had any evidence for this proposition.

The Obama camp has managed to violate almost every tenet of crisis communications - starting with Rule No. 1: Get all the information out quickly, accurately and fully. 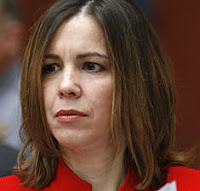 Any hopes of a peaceful holiday season in the Blagojevich neighborhood unraveled last week with the governor's arrest. Christmas carols and jingle bells have to compete with idling news trucks and helicopters, and the first lady is sorry about that.

Patti Blagojevich sent out a note over the weekend to surrounding homes. It read:

My husband and I would like to apologize to you and your family for the media barrage that descended on our neighborhood. While we signed up for this kind of attention by choosing a life in public service, you didn't. All you did was choose to live in our wonderful neighborhood.

Ed “Fast Eddie” Vrdolyak, the infamous alderman and political thorn in the side of former Chicago Mayor, the late Harold Washington, was quoted as saying that he "talks to everyone as if they’re wearing a wire – even my wife." Vrdolyak was the target of numerous investigations through the years but prosecutors could never catch him.

In 1980, a vacationing Rod Blagojevich camped in front of Richard Nixon's home, with a friend, until the pariah ex-president emerged and this picture was taken. What the hell is wrong with this guy?

At least the disgraced, bribe-hungry Illinois governor was smart enough not to voluntarily tape his incriminating conversations, as far as anyone knows (unlike Nixon).