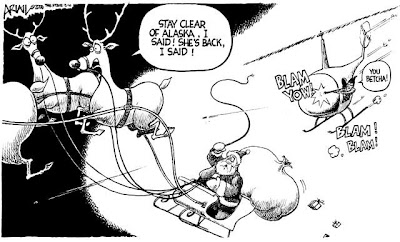 If Alaska didn't already exist, you'd all have to invent it.

-- DAVENOON
The mystery drug behind the arrest of Sherry Johnston, the mother-in-law to be of Alaska's favorite pregnant teen Bristol Palin has been named, and it's not meth, the drug Wasilla is usually famous for.

No, this time round it's Oxycontin.

Oxycontin is an opioid analgesic medication similar to Codeine that is used for pain relief in severe cases and for cancer patients. The drug is taken in tablet form legally (it's available by prescription) or snorted, crushed or injected by addicts. It's considered highly addictive and has strict controls over its distribution in many countries.

Pain killer abuse isn’t new, although experts say that Oxycontin is fast becoming the drug of choice among pain killer addicts, and it's apparently popular with teens as well.

It's not clear from reports whether Sherry Johnston was manufacturing the drug, just doctor shopping prescriptions and selling them on to addicts . . . or simply popping them all herself, but on a bright note, at least it wasn’t meth.

Had the Republicans won the election, Bristol’s son might have had one grandmother in the White House and the other in prison. It adds a curious new chapter to the family saga of Palin, known as the "thriller from Wasilla."
-- TIMES ONLINE
[This] goes along great with the whole "snow redneck" theme of the Palin campaign, but we're hoping it's just plain pot. Because there's nothing better for a baby to grow

up around than a wise, pot-smoking grandma.

UPDATE: Whoops, it was oxycotin. Which is totally the hillbilly heroin the way that meth is rural cocaine, so the Snow Redneck analogy still stands.

-- DREW
Wasilla is Alaska's Meth Capital, so kudos to Sherry Johnston for shaking it up with prescription pills instead of the crystal.

This is a sad and not-at-all entertaining story of broke-ass bored trashy people in a miserable unhealthy little sprawling town using and selling drugs to briefly escape the dull pain of their shitty lives, and it would not be news that the mother of a high

school dropout who's marrying some idiot girl he impregnated was arrested for using drugs except that at some point we were all instructed to admire these exalted Real Americans. The Republicans were sort of right, these people are representative of America's small towns, and that is why as a whole we decided to elect the smart, educated, well-off urbanite aspirational black couple from Chicago instead of the angry Vietnam veteran and the scary PTA moron-bitch with the fucked-up family.

-- PAREENE
I can’t decide which part is my favorite: Is it Kayo comparing The One's nowing, voluntarily association with a terrorist to Palin being saddled months ago with an 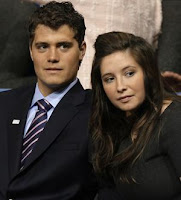 in-law who was busted just this week? Or is it him using Palin's own supposed lack of empathy to declare open season on this story, replete with nasty drug jokes from an actual comedian about what Bristol Palin’s baby should be named? It gets tiresome pointing out Olbypocrisy, but try to imagine his reaction if one of Joe Biden's in-laws was arrested for possession and O'Reilly spent a segment overtly goofing on it.