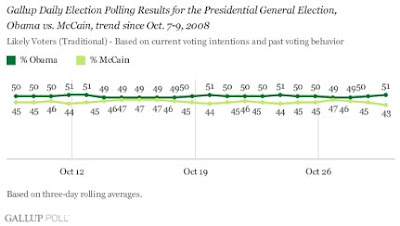 Being a big believer that public-opinion polls are merely snapshots in time, I have been loath to cite let alone read too much into the blizzard of polls this fall.

But the latest Gallup Poll using the traditional model is a shocker and, for all intents and purposes, a very real indication that Barack Obama has nearly sealed the deal.

Gallup’s traditional "likely voter" model is the most conservative of its polls in that it has been battle tested in past elections and factors in prior voting behavior as well as current voting intention.

If McCain had a snowball's chance in Hell, this poll would show a closer contest. Instead, it shows Obama up by eight points.

Speaking of blizzards, there are beaucoup stories out there about how McCain could still win.

Some of these are a product of the organic tightening that typically occurs in the closing days of a presidential campaign, and there is some evidence of that elsewhere if not in Gallup's likely voter-survey. But most of these stories are reflective of a news media that wants to hedge it’s bets.

Then there are pundits like Bush lap dog John Podhoretz, who acts like he's smoking funny cigarettes in listing 10 reasons why McCain could pull it out.

I would rate nine as drop dead hilarious (like Obama finally being outted as being a liberal) and one as possible (there is a hitherto unnoticed block of Hispanics who really think McCain is their tamale.)

Posted by Shaun Mullen at 2:12 AM
Email ThisBlogThis!Share to TwitterShare to FacebookShare to Pinterest