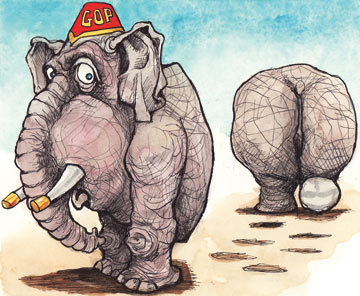 How likely is it that the Republican Party will come to its senses? There are glimmers of hope. Business conservatives worry that the party has lost the business vote. Moderates complain that the Republicans are becoming the party of "white-trash pride." Anonymous McCain aides complain that Mrs. Palin was a campaign-destroying "whack job." One of the most encouraging signs is the support for giving the chairmanship of the Republican Party to John Sununu, a sensible and clever man who has the added advantage of coming from the northeast (he lost his New Hampshire Senate seat on November 4th).

But the odds in favour of an imminent renaissance look long. Many conservatives continue to think they lost because they were not conservative or populist enough -- Mr. McCain, after all, was an amnesty-loving green who refused to make an issue out of Mr. Obama's associations with Jeremiah Wright. Richard Weaver, one of the founders of modern conservatism, once wrote a book entitled "Ideas have Consequences"; unfortunately, too many Republicans are still refusing to acknowledge that idiocy has consequences, too.

It’s only been a week since the defeat, but the battle lines have already been drawn in the fight over the future of conservatism.

In one camp, there are the Traditionalists, the people who believe that conservatives have lost elections because they have strayed from the true creed. George W. Bush was a big-government type who betrayed conservatism. John McCain was a Republican moderate, and his defeat discredits the moderate wing.

. . . The other camp, the Reformers, argue that the old G.O.P. priorities were fine for the 1970s but need to be modernized for new conditions. The reformers tend to believe that American voters will not support a party whose main idea is slashing government. The Reformers propose new policies to address inequality and middle-class economic anxiety. They tend to take global warming seriously. They tend to be intrigued by the way David Cameron has modernized the British Conservative Party.

Moreover, the Reformers say, conservatives need to pay attention to the way the country has changed. Conservatives have to appeal more to Hispanics, independents and younger voters. They cannot continue to insult the sensibilities of the educated class and the entire East and West Coasts.

The debate between the camps is heating up. Only one thing is for sure: In the near term, the Traditionalists are going to win the fight for supremacy in the G.O.P.

[T]here’s little need to take the really bad-faith conservatives seriously now. For the last eight years, we’ve had to take them somewhat seriously because they had access to political power . . . You had to listen to and reply to even the most laughably incoherent, goalpost-moving, anti-reality-based neoconservative writer talking about Iraq or terrorism because there was an even-money chance that you were hearing actual sentiments going back and forth between Dick Cheney’s office and the Pentagon. . . .

But I think we can all make things just ever so slightly better, make the air less poisonous, by pushing to the margins of our consciousness the crazy, bad, gutter-dwelling, two-faced, tendentious high-school debator kinds of voices out there in the public sphere, including and especially in blogs. Let them stew in their own juices, without the dignity of a reply, now that their pipelines to people with real political power have been significantly cut.

A new set of issues — energy policy, climate change, healthcare and global citizenship, to name a few — are going to define elections of the future, and conservatives need to address these and develop solutions if they want to claw their way back to relevance. Otherwise, life support is going to fail.

I like Sarah Palin, and I've heartily enjoyed her arrival on the national stage. As a career classroom teacher, I can see how smart she is -- and quite frankly, I think the people who don't see it are the stupid ones, wrapped in the fuzzy mummy-gauze of their own worn-out partisan dogma. So she doesn't speak the King's English -- big whoop! There is a powerful clarity of consciousness in her eyes. She uses language with the jumps, breaks and rippling momentum of a be-bop saxophonist. I stand on what I said (as a staunch pro-choice advocate) in my last two columns -- that Palin as a pro-life wife, mother and ambitious professional represents the next big shift in feminism. Pro-life women will save feminism by expanding it, particularly into the more traditional Third World.

It would be restful if, along with Joe the Plumber, John McCain's running mate just went off into a disposable-celebrity waste basket along with the other used Kleenex of the campaign, but Sarah Palin and the idea of her are still with us, as Andrew Sullivan so cogently points out:

"That the Palin absurdity should follow the two-term presidency of another individual utterly out of his depth in national government is particularly troubling; 46 percent of Americans voted for the possibility of this blank slate as president because she somehow echoed their own sense of religious or cultural 'identity'. Until we figure out how this happened, we will not be able to prevent it from happening again."

Promoting an over-aged cheerleader with no political substance whatsoever for 2012, as William Kristol and others are doing, is a sign that the diaper division of the Republican Party has no interest in going back to its Goldwater-William F. Buckley roots and offering principled opposition to the new Democratic majority.

Palin's ascension is highlighted by the decline and fall of Ron Paul who, in his own idiosyncratic way, identified some of the issues that his party should be considering and debating.

There's a lot of sudden chatter about what the core meaning of conservatism is. That's different, of course, from what the core direction of Republicanism will be. I think a huge amount of the future of the GOP is less up to the Republican leadership and "conservative" intelligentsia than to what Obama does and how the opposition reacts.

Cartoon by KAL for The Economist

You missed one quote that would indicate that the answer to your question about the GOP coming to it's senses anytime soon. If stuff like this keeps being spit up by the right, it's gonna be a long haul: