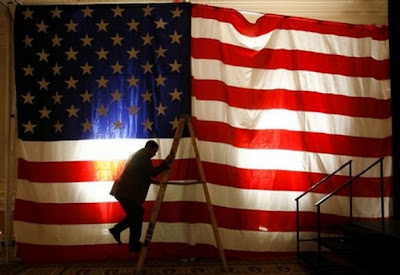 By temperament and instinct, Obama is far more likely to govern from the center, to situate himself, politically speaking, at ground zero. On Tuesday night, he captured the middle – self-described "moderate" voters (the largest segment of the electorate) supported Obama over John McCain by 21 percentage points – and, in terms of political viability, the middle is ultimately where a president needs to be.

Folks in the middle are fed up with ideological partisanship, the ongoing Washington strife between left and right – and Obama addressed their disgust on election night, when he urged that we all "resist the temptation to fall back on the same partisanship and pettiness and immaturity that has poisoned our politics for so long." He wants to reach out and find common ground, if only to dampen the potential ire of his opponents (thus hewing to Michael Corleone’s in advice in Godfather II that it is wise to "keep your friends close, but your enemies closer").

-- DICK POLMAN
By the time of his Denver convention, Obama understood that he had to dispense with the magic and make himself kitchen-table real, accessible and, above all, reassuring. He did that. And when the economic tsunami hit, he understood that all he had to do was get out of the way. He did that too.

With him we get a president with the political intelligence of a Bill Clinton harnessed to the steely self-discipline of a Vladimir Putin. (I say this admiringly.) With these qualities, Obama will now bestride the political stage as largely as did Reagan.

When asked by Chris Wallace what "conservative solutions" the GOP would bring to their current minority-party status, Pence said social issues like "the sanctity of marriage" will remain the backbone of the Republican platform.

"You build those conservative solutions, Chris, on the same time-honored principles of limited government, a belief in free markets, in the sanctity of life, the sanctity of marriage," Pence said.

The Indiana representative cited the ballot measures against gay marriage that passed on Election Day as evidence of the continuing presence of conservative values.

-- DAVID EDWARDS and ANDREW McLEMORE
There are very few members of congress with whom I’ve ever had the opportunity to discuss a substantive matter of public policy. But as it happens, one of them — the one with whom I’ve had the second-longest exchange — is Mike Pence (R-IN) who I’ve seen on television today repeatedly discussing the Republican Study Group's "plan" for the financial crisis. And I can tell you this about Mike Pence: he has no idea what he’s talking about. The man is a fool, who deserves to be laughed at. He's almost stupid enough to work in cable television.

Palin covered her inadequacies with folksy charm and by drumming up a class war, turning her audiences not just against elites but against the party’s own educated members. The movement created by that superelite, but never elitist, William F. Buckley Jr. was handed over to Joe Six-Pack. Know-nothingness was no longer a stigma, but a badge of honor.

The Republican Party's Baghdad Bobism with regard to Palin, a denial so pernicious that party operatives were willing to let her sit a heartbeat away from the presidency in a time of war and financial collapse, revealed what really ails the party. The "P Factor" isn’t a single person but a sickness that will have to be acknowledged and cured -- Republicans will be reciting their newly tailored principles only to themselves.
-- KATHLEEN PARKER
Newt Gingrich's continuing reputation as an "ideas man" and political visionary is one of the stranger phenomena in modern politics, and, for liberals, one of conservatism's happier blind spots. Who better to serve as the intellectual engine of a brain dead movement than a guy whose latest obsession is ending adolescence? (No, I'm not kidding.) Gingrich is what a shallow political thinker believes a deep political thinker looks like: A guy with a constant stream of grand theories and paradigm-busting ideas and sharp quotes. And so, after an election that turned, in part, on the contrast between the Democratic ticket's obvious comfort with national policy and the Republican ticket's inability to speak coherently on economics.

-- EZRA KLEIN
In my evolution from a would-be reformer of the GOP to a supporter of President-elect Obama, I have been asked the inevitable "why" and "how" questions -- and I have answered those questions, indirectly. But I’ve never gone so far as to admit what I will admit now: I am no longer a Republican. I am no longer a conservative.

To be clear: I still believe in many of the principles that first led me to the Republican Party. I still have a number of conservative tendencies. But of this party and movement, as they are defined today, I am no more.