Musings On The Great Economic Collapse Of Aught Eight: Are We There Yet? 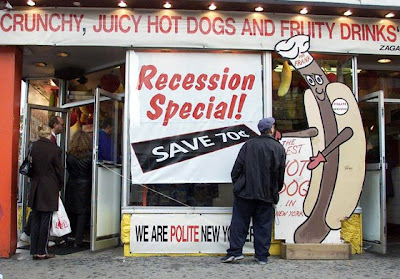 I was talking to a hard-working middle-class friend who is one of many people to take a bath in the stock market (he's lost $60,000 on his 401(k) plan; another friend has lost $100,000) and he mentioned that he was "shocked" that the economy is in free fall.

"How can you be shocked?" I gently inquired just in case he was calling from a window ledge high above a street somewhere. "Being shocked implies that you still have faith in government and the markets?"

He had no answer. So let's retire "shocked," okay?

AND HERE'S ANOTHER WORD TO RETIRE


I'm not an economist, nor did I stay in a Holiday Inn Express last night, but it seems to me that extending unemployment benefits is perhaps the most simple and direct way to try to stimulate the economy. Incredibly, My President and I are on the same page about this.
And boy do benefits ever need extending: New claims for unemployment jumped "unexpectedly" (another word that needs a long rest) to a 16-year high last week, according to the Labor Department, with 542,000 new claims for jobless benefits being filed.

The number of people continuing to claim unemployment insurance is expected to reach 3.9 million, its highest level in 25 years, and remember that this number does not include people who have given up looking for work whether they live in cardboard boxes atop steam vents or not.

By the by, although you won't hear the R-word escaping the lips of My President or his minions, claims above 400,000 are considered a sure sign of a recession.

LEAVE THE GUY ALONE
President-Elect Barack Obama is catching flak in some quarters for resigning from the Senate before the current lame-duck session is over. This is because he "may have missed an opportunity to exert leadership," as one economic pundit put it.

This is a laughably sad observation, or just laughable, and humor is needed desperately in all of this.

As Obama's advisers have had to constantly reminded us, there is only one president at a time. The Constitution says the same thing.

THE END OF THE BEGINNING
The bottom is still nowhere in sight, but the imminent failure of Citigroup would at least mark the end of the beginning of the financial crisis.

As noted here, Citi is not only too big to fail, it's to big to rescue, and nationalization is unpalatable for a number of reasons, including the need for several governments to play roles in such an immense undertaking.

THEY'RE NOT ALL BAD GUYS
The term "subprime lender" has the cachet of "socially-transmitted disease carrier" these days, which is eminently fair insofar as the big bad guys like Bear Stearns are concerned.

But there are a lot of good guys in that pool who are being portrayed unfairly, and not coincidentally many are beneficiaries of the Community Reinvestment Act. This was created to prevent redlining in minority nabes but has become a convenient if unfair whipping boy for conservatives who automatically default to colored people as the root of all social problems.

One such good guy is for-profit Clearinghouse CDFI in Orange County, California, which since 2003 has issued $220 million worth of subprime mortgages without getting its nose broken. But there are others, as well.

FOX-IN-THE-HENHOUSE ALERT
While I may not be an economist, I'm pretty facile when it comes to the state of health care in American (on a ventilator), what it will take to get the patient back on its feet (nothing short of some form of universal care), as well as the fact that there cannot be an economic recovery without saving the patient.

So I was . . . er, shocked to read that the health-insurance industry now says it supports a requirement that insurers accept all customers regardless of illness or disability. This is welcome news because the industry, which along with Big Pharma and big for-profit hospital chains, have been the major impediments to health-care reform.

But there has to be a catch, right?

And here, at first glance, is that catch: The existing web of insurers remain intact, which they would be unlikely to do under a form of universal coverage that would involve significant federal government participation, so the industry lives to fight another day, a victory in and of itself since it will be seriously under the gun after Obama is sworn in.

Those insurers are regulated at the state level, and there still would be nothing to prevent a person with serious or chronic illnesses to continue to pay through the nose compared to a healthy person, which kind of defeats the notion that the playing field must be leveled if there is to be real reform.

So hold the applause, okay?

GIVE THE MONEY BACK, MACKDADDY
Mack "MackDaddy" Whittle is exactly the reason that bankers have morphed from community pillars to whom you entrusted your first savings as a kid to vultures in a class with lawyers, used car salesman and . . . well, journalists.

Whittle, longtime CEO of South Financial Group and a McCain campaign financial adviser in South Carolina, moved up his retirement so he could cash in on an $18 million golden parachute before sending his bank to the feds to get $347 million in bailout money.

Now a shareholder is suing MackDaddy to returned the money. Do it, man.

THRU THE DETROIT LOOKING GLASS (DARKLY)
Two things are abundantly clear after the tin cup rattling before Congress by the executives of the Big Three automakers: They are shameless hacks who don't have a clue about the mess they've made and they probably aren't going to get a cent of our bailout money because when they report back next month they won't want any real strings attacked to their handout . . . er, bailout. (Okay, that's three things.)

This recalls the last time an automaker asked for help -- the 1980 Chrysler bailout, which had no strings attached other than paying back the loan with interest.

Chrysler made good and prospered for a while because it was able to ride the minivan and then the SUV waves, but in the end reverted to the same old bad habits that have put General Motors and Ford over a barrel.

This trip down memory lane prompts a timely question: What would have happened to Chrysler if it had been forced into bankruptcy, which is the prudent consensus course for GM?

NOSTALGIA SUPREME
The Dow Jones Industrial Average closed at a gut wrenching 7,552.29 on Thursday, down another 5.56 percent on top of earlier big losses. Which begs the question (for me anyway) about when was the first time the Dow broke the 7,500 threshold.

It was June 1997 when the unemployment rate was so ridiculously low that there were fears of a labor shortage.