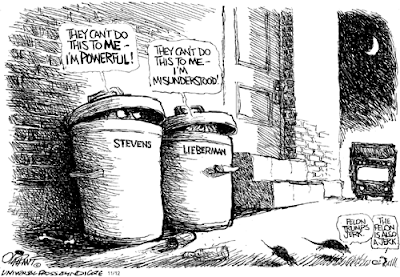 -- JOSH MARSHALL
Lieberman - clearly firm in his belief that actions should not have consequences, that he should incur no penalty for palling around with the McCain forces - is now threatening in so many words to defect to the Senate GOP if the Democrats try to snatch away his Homeland Security gavel. Well, perhaps the Democrats should call Lieberman's bluff on that one, just to see whether he is really serious about spending the remaining four years of his term as a member of the minority party.

And even if Lieberman does walk - leaving the Democrats with, say, a bumper crop of 57 or 58 senators - the majority party at least will have taken a stand on an important principle: the notion that loyalty matters, that certain partisan borders cannot be breached.

If you read mainstream corporate print journalism, you quickly learn that everyone that is anyone is chiefly preoccupied at the moment with the prospect of the Democrats "moving to the left." To a very small degree, this concern relates to government spending on things like health care and education. To a much larger degree it concerns anything that might infringe on Free Trade or help Labor Unions. In almost cult-like fashion, one corporate journalist after another intones on the damage the Left will do to the economy if they strengthen Labor or weaken unfettered free trade. Have any of these journalists looked at the economy? It's been a while since the Treasury Department was in the hands of people that might "move to the left."

-- BOOMAN
Obama, who has shown he can draw lessons from Bill Clinton's presidency, can find one on this issue. Picking up on the pro-choice movement's most popular slogan, Clinton declared during his 1992 campaign that abortion should be "safe, legal and rare."

As Frum leaves and Buckley is fired, and Parker flees, and we are left with adolescent bilge from Kathryn-Jean Lopez and spittle-flecked postings from Mark Levin and Andy McCarthy and Mark Krikorian and Mark Steyn, it may indeed be time to call the era of National Review as a repository for intellectual debate over. Parker and Frum were about the only voices of skepticism on the insane Palin nomination.

Let's be frank: the place is now a choir for a church. What matters is maintenance of dogma, not pursuit of ideas. The election year proved it beyond much doubt.

-- ANDREW SULLIVAN
[Obama's] daughters' schooling has raised an old familiar cry of "liberal hypocrisy" from the right. This time, the charge is nonsense.

-- MICHAEL TOMASKY
A few years ago Rush Limbaugh announced to his listeners that Roosevelt was dead and that the Republicans were ready to bury his policies as well. That was then - this is now and it's Ronald Reagan's policies that are about to be buried.

-- RON BEASLEY
Pro-life and pro-family agendas can appeal to minority voters in an increasingly diverse society. California, Arizona and Florida approved amendments banning same-sex marriage. They did so at least partially on the basis of African-American and Hispanic voters who "surged" for Barack Obama and then voted against same-sex marriage. In California (70%) and Florida (71%) black voters supported both traditional marriage and Sen. Obama overwhelmingly.

The third core value must be a diversity agenda that aggressively recruits ethnic minorities into significant involvement in the GOP. The 2008 Republican National Convention did not reflect America's ethnic diversity. Demographics dictate that this must change, and decency demands that it should. This must include a more proactive approach on immigration reform.

-- RICHARD LAND
[M]uch like the original Southern Strategy, this is the sort of solution that bets on ignorance and the past, as opposed to education and the future. "Blame teh blackz" and especially "blame teh latinz," presents a demographic problem that "blame teh gayz" doesn't. But it still has the same limited returns, in that it bets on young people being as uncomfortable with gay people as their parents. I see virtually no evidence to support that idea, and a lot of evidence for the reverse.

Cartoon by Pat Oliphant/Universal Press Syndicate
Posted by Shaun Mullen at 1:00 AM
Email ThisBlogThis!Share to TwitterShare to FacebookShare to Pinterest