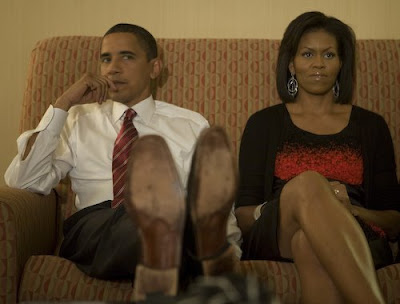 I saw a lot of tears election night. I'm a weird cat, emotions burn slow in me. I didn't get 9/11, emotionally, until months later when I started reading the individual stories. I think I was most sad, like a year or two after the towers fell. Ditto for our First Black President. I felt good Election Night, but mostly numb. But all this week small things have been pointing me to the importance of this moment.

I saw this picture over at TPM. I don't think a lot of folks understand how hard black people take their portrayal in mainstream media. We probably spend more time bemoaning the latest R. Kelley affair, than bemoaning racism. America is like the NFL--without the salary cap. And some days to be black, is to be a Detroit Lion. Before they fired Matt Millen. And then something like this happens, and after years of feeling ashamed you look up and you see what you represent on your best days, what you hope your fam represents--vision, courage, competition, confidence--is represented at the highest levels of this country. You wake up and realize that your best face, is the face of the country, is the face of the world.

I'm broadcasting live from Harlem at five in the morning. The boy has to go to school. I've got to go run my miles. I haven't done a lick of work (as my mother would say) and yet. already, I feel the need to have a drink. Damn. Black people, are ya'll ready for this?

-- TA-NEHISI COATES
Folks, I may not be here next time so I want you to remember this. You really should strive for a Presidential nominee who is smarter than you. Someone who understands you but doesn’t necessarily need to have a beer with you. Strive for a Renaisance man. Someone who knows that Walt Whitman wasn't a guy who made chocolate candy. And a good rule of thumb from this point forward: someone who fully understands that the Flintstones isn’t a documentary.

We are a large, diverse country but we live in an even larger, more diverse world. No President ever has a mandate. Even the least among us need to be heard, and if possible, helped. Differences should be celebrated not feared. I hope one day we all understand that love is not about the body; it is about the heart. Think about it.

When I point out to my conservative friends that in terms of federal spending and exploding deficits, Reagan’s limited government rhetoric didn’t always match reality, they are offended that I would dare question the Republican messiah. Likewise, conservatives can take solace in the fact that the right-wing nightmares and left-wing dreams induced by the new Democratic messiah won’t amount to much either. As of this writing, Jeremiah Wright and Bill Ayers haven’t been considered for any cabinet positions, but former Clinton officials John Podesta, Carol Browner and William Daley have. In fact, there isn’t much to indicate that the second black president will govern much different from the first.

-- JACK HUNTER
There are countless articles being written and conversations going on that address the GOP's fall from power and the likely roads back. The Republican Party is particularly weak in the Northeast which is, obviously, a major population center. The road back in the Northeast is fairly obvious.

The GOP's greatest advantage is the two-party system that almost guarantees that any Democratic loss is a Republican gain. The Republicans must recruit socially moderate-to-liberal candidates that are ready to pounce on the first sign of weakness in a Democratic office-holder. This is the mirror-image of what the Democrats have done in picking off southern seats in both the Senate and the House. Once the Republicans have reestablished a rump of socially moderate-liberal members, they'll be back on the path to a viable national party.

-- BOOMAN
To the degree that the nation has cast its gaze on Alaska, it's been with bug-eyed disbelief that its voters may have actually re-elected Ted Stevens instead of, say, making a vest and hat out of his skin. Beyond that, I can't imagine what sort of sustained interest the rest of the nation might have in the operatic gyrations of Alaskan politics. But Palin seems convinced that Americans -- real Americans, that is, the pro-Americans who failed to elect her -- are eagerly awaiting the arrival of those fungible commodities whose molecules we don't flag, and that the state of Alaska is somehow going to serve as a government-in-exile for the Drill Now/Drink America's Milkshake Party.

-- DAVENOON
Obama's stunning announcement that he was seeking a "hypoallergenic dog" for his daughters finally confirmed the fears of many conservatives, such as Focus on the Family, that Obama is just like Hitler, who also excited crowds and was similarly elevated to power through the democratic process before he became a ruthless dictator. "Hypoallergenic" is, of course, a codeword for dogs that are pure breeds, which are dogs that have been bred according to the very same kind of evil eugenics practiced by the Nazis.

No matter what breed of dog or other pet Obama's family ends up getting, Obama is sure to disillusion a large part of his constituency and scuttle any chance his administration has of getting anything done. It is a tragedy that a presidency that had so much promise and potential, which patriotic conservatives who love their country really were pulling for, should go down in flames so soon.