Should Obama Take The Easy Way Out On Bush Era Crimes? Absolutely Not. 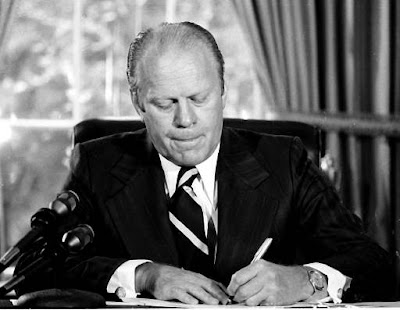 The quality of mercy is not strained. It droppeth as the gentle rain from heaven.
-- BILL SHAKESPEARE
Will Barack Obama pull a Gerald Ford and take the easy way out concerning the crimes of the Bush administration?

If you believe two anonymously quoted Obama advisers, there is little chance the new president's Justice Department will be told to go after anyone involved in authorizing or carrying out the brutal interrogations that provoked worldwide outrage. We're talking Messrs. Cheney, Addington, Gonzalez and Yoo here.

Two other Washington insiders said the same thing on the record.

"These things are not going to happen," said Patrick Leahy, whose Senate Judiciary Committee would play the major role in any Congressional involvement in possible prosecutions, while Robert Litt, a former top Clinton administration Justice Department prosecutor, believes that Obama should focus on moving forward with an anti-torture policy instead of looking back.

"Both for policy and political reasons, it would not be beneficial to spend a lot of time hauling people up before Congress or before grand juries and going over what went on," Litt opined. "To as great of an extent we can say, the last eight years are over, now we can move forward -- that would be beneficial both to the country and the president, politically."

For those with short memories or lifespans, that is the rationale that President Ford used in pardoning Richard Nixon for his high crimes, a move that Will Bunch notes was widely and inaccurately hailed as one that healed the nation.

It was that precedent that later emboldened the Reagan administration to thumb its nose at Congress and carry out the Iran-Contra arms-for-hostages scheme. This scandal took down Defense Secretary Casper Weinberger and neoconservative thug Elliot Abrams, an assistant secretary of state, but both were pardoned by President George H. W. Bush.

These go-free cards also certainly helped grease the skids for Pardongate, the issuing of 140 pardons and commutations by President Clinton on his last day in office. (Among those pardoned was fugitive financier Marc Rich, who got out from under tax evasion charges with a big assist from Eric Holder, who apparently is Obama's attorney general designate.)

Then we have the commutation of the sentence of Scooty Libby by President George W. Bush, as well as the likelihood of him issuing many more pardons and commutations a la Clinton.

Can convicted Bush administration officials and Republican Party bigs David Safavian, Dusty Foggo, Ted Stevens, Robert Ney, Duke Cunningham and James Tobin, among many others, expect gifts from the White House under their Christmas trees? Does Santa Claus have a big, white beard?

Looking past the White House's crimes in the service of moving forward while not repeating past mistakes like . . . er, torturing people and ignoring the Geneva Conventions, is indeed the easy way but not the best way.

Letting bygones be bygones has a Hallmark niceness to it, but then I don't recall any cards at my local gift shop with Thanks For Waterboarding Me, Friend! or I Just Loved Being Extraordinary Renditioned! Or how about Remember Those Wild Times at Gitmo!

As Bunch notes, taking the easy way out would be another link in a now-long chain of increasingly powerful presidents who forgave lawbreaking with the stroke of a pen.

Where would or should this craziness end? What is to prevent Obama administration officials from breaking the law confident that they would get off?

There are at least a couple of default positions here: That proving Cheney and Company broke the law -- especially if the charge is a war crime -- will be difficult, so why bother to try? And that other interested parties who don't lack for cojones, likely special interest groups abroad, may try anyway.

Make no mistake that the Bush administration torture policy architects knew that what they were doing might be criminal.

They may have given short shrift to planning the invasion of Iraq and tracking down Osama bin Laden quickly became an abstraction, but they held dozens of meetings in the White House Situation Room to meticulously plan how prisoners could be abused, the Geneva Conventions ignored and a rump legal system cobbled together to insure convictions without the nuisance of following the rule of law.

That is why these officials first denied that torture was being used and then wrapped themselves in legal opinions based on junk law.

These included the obfuscations of John Yoo, whose singular talent in the Justice Department's Office of Legal Counsel was to take desired outcomes such as giving torture a veneer of legality by green lighting its use through backfilling with gibberish-filled memos.

So yes, criminality would be hard to prove, but possibly less so in a foreign venue where the Military Commissions Act, which with great foresight immunized potential perps against prosecution, is not in force.

The problem is finding a foreign court willing to handle this hot potato, and so far attempts to prosecute former Defense Secretary Rumsfeld for his role in the Iraq War have foundered for that very reason.

Finally, there is a middle course between the easy way and the hard way: Form a committee.

Actually, how about a bi-partisan commission to charged with plumbing the depths of the dark side?

There is ample precedent for such a commission. In fact, there have been 22 since the first was established in the wake of the 1941 Pearl Harbor surprise attack, and have famously included the Warren Commission and 9/11 Commission.

Andrew Sullivan, who has courageously led the charge in the blogosphere to reveal the full extent of the Bush administration's extralegality, argues for a truth and reconciliation-style commission over at The Daily Dish. A commission of this kind was successful in South Africa in great part because witnesses were immunized.

But for once I respectully disagree with Sullivan.

South Africa and apartheid are not an appropriate template for the Age of Bush and torture. And while fact finding would be the primary responsibility of a torture commission, its findings must be admissible as evidence if there are later criminal proceedings. That cannot be ruled out, while the truth and reconciliation model would rule that out.

Beyond the Warren Commission, there are two other precedents for fact finding that can be rolled into admissible evidence: The 1986 Rogers Commission on the Space Shuttle Discovery accident and the Tower Commission that same year on Iran-Contra.

Does the embrace of torture rise to the level of a presidential assassination or half assed arms-for-hostage deal? Of course it does, because like those two events, as well as the Watergate scandal that led to the Nixon pardon, the very underpinnings of government were put in jeopardy.

But it again comes back to the question of political will.

Many Americans, upwards of half according to some polls, approval of torture. That is, so long as the person being tortured is not a loved one. And the issue sank like a stone during the president campaign although one of the candidates was the first in history to himself have been tortured by an enemy.

So why not bypass the Justice Department, as well as the partisan witch hunters at home and hotheads abroad, and by executive order of President Obama create a torture commission? Count me in.

And let the chips fall where they may.

Posted by Shaun Mullen at 12:21 AM
Email ThisBlogThis!Share to TwitterShare to FacebookShare to Pinterest

Shaun, on July 25th I wrote a post titled, " Would Barack Obama, when he becomes President, grant immunity to a departing George W. Bush?

I thought that Bush would not dare grant himself immunity then, but would ask Obama for it when he took office similarly to what happened when Gerald Fprd took office from Nixon's departure. But now I am not sure that Bush won't pardon himself!