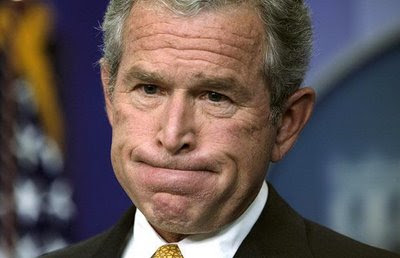 [President Bush's] critics by and large don’t give him much credit because he has not been very successful on his own terms, and many of his preferred policies have been simply calamitous. War opponents don’t give him credit that his war is now not nearly as destructive and horrifying as it once was–he started the war! Critics of his NATO expansion policies don’t give him credit for that because it was a terrible idea that contributed to the outbreak of the war in the Caucasus. Critics of recognizing Kosovo independence don’t give him credit for that, either, because once again it was a terrible idea that also contributed to the outbreak of the war in the Caucasus. He does not get credit for the loose monetary policy that helped to create the present crisis, because that is not something to be praised. His deliberate efforts to increase homeownership in reckless ways are not praised because they were misguided and have come back to bite us. Which policies, exactly, merit appreciation and respect for Mr. Bush? The illegal use of wiretapping, or the use of torture, or perhaps the shredding of 4th Amendment protections (with a big assist from the Congress), or maybe declaring U.S. citizens and foreign nationals enemy combatants without real cause and then holding them without charge for years? If you are concerned about AIDS in Africa and homelessness, by most accounts Bush administration policies in these areas have been reasonably effective. In most other respects, his administration has been a disaster. It is difficult to see what it is we will be thanking him for in the years to come. Many of his critics don’t blame him for everything that has gone wrong–they hold him accountable for the things that he and his administration did wrong, including many things that take away any right to expect the respect that is properly accorded to his office. Mr. Bush frittered away that respect with the decisions he made, and in the process he diminished the respect shown to our country.

Bush has set conditions that could allow Obama, if he abandons the desire to be liked as the underlying principle of his foreign policy and sticks to the path the Bush administration has laid out, to preside over the greatest blossoming of liberal democracy and stability the Middle East has ever seen, and in all likelihood, to get the credit for it.

For all of this, Barack Obama owes George W. Bush a tremendous debt of gratitude.

[T]here is one thing Mr. Obama must do quickly to begin to repair this nation’s image and restore its self-respect: announce a plan for closing Mr. Bush’s outlaw prison at Guantánamo Bay.

. . . We are under no illusions. Closing the prison will not be easy, or quick, but it can be done. It does not mean that the United States will set free heinous terrorists. But it may mean that these prisoners will have to be tried on other very serious charges than the ones supposedly for which they were sent to Guantánamo.

That is Mr. Bush’s fault. His decision to authorize the torture of detainees has made it highly unlikely that the evidence collected at Gitmo and the C.I.A.’s illegal prisons around the world would stand up in a real court.

It's fair to say there isn't a single cabinet agency that's better now than when Bush took office -- better managed, better organized, more efficient, more competent -- but to see what the Bush gang has done to the Justice Department is practically a crime in and of itself.

If there's anything the last decade and one half has taught us it is too look very skeptically at purportedly generational political trends. But the latest Gallup poll data is still very telling about the immediate political moment. While the Republican party had a real image problem leading up to the November election, improbably, it's gotten dramatically worse since the election. In October, the GOP's favorable/unfavorable was 40%/53%. Now it's 34%/61%. So almost twice as many people have an unfavorable view of the GOP as a favorable one.

Things can change quickly, especially in such unpredictable, unstable times. But major political parties don't get much more unpopular than that.

I wish President-Elect Obama does an excellent job, and if he does, he will be worth naming things after. But right now no-one really knows whether he'll be an excellent President, a mediocre President, a poor President, or a very bad President. (Keep in mind the sobering story of the Richard M. Nixon Freeway -- the name that the Marina Freeway in Los Angeles bore for a few years in the early 1970s.)

Of course, Obama has already achieved the status of the first black President, and it's quite natural for people -- especially, but not only, blacks -- to admire and celebrate this achievement, which is indeed quite stunning given American history of not so long ago. Likewise, I'm sure American Catholics celebrated John F. Kennedy's achievement of being the first Catholic President in 1960, as did non-Catholics who welcomed this marker of the decline of anti-Catholic sentiment. Other groups have celebrated similar milestones.

But important as getting a job might be, especially under the circumstances, the ultimate goal of getting the job has to be to do the job well.

Here, in the winter of conservative blogger's discontent, a small ray of sunshine has peeked through the black clouds and brightened what has otherwise been an unrelenting skien of gloom and doom.

I am talking about how president-elect Barack Obama has tacked to the center by reaching out for establishment Democrats and Clintonites to fill in the first blanks of his administration’s personnel sheet and the reaction to that by our blogging friends on the left. And then there’s the sore spot that is Joe Lieberman and the monumental sense of betrayal felt by the Kos Kids that the "traitor" wasn’t boiled in oil and his bones made into a xylophone.