'They Both Had A Big Gentle Chuckle' 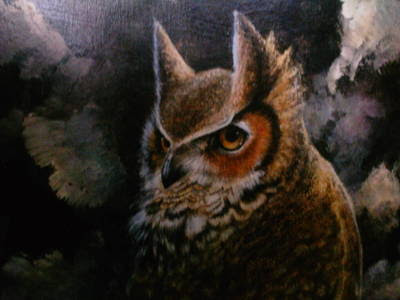 Across the road, a man stood on his flat roof
at 9 pm every night,
hooting a good sounding hoot at the owl
in the dark cottonwoods,
and he was so thrilled
that the owl hooted back at him.
Hoo hoo, said one,
Hoo hoo, called the other . . .

And night after night this went on . . .

Until another neighbor man mentioned how
at exactly 9pm after dusk
he would hear a hoot owl cry,
and he would cry back,
Hoo hoo
to each Hoo hoo he heard.
And how wondrous it was, he said,
that he and the owl spoke to each other
every night.

It soon became clear
the men had been Hoo hooing
not with an owl,
but at each other,
each convinced it was the real McCoy.
And they laughed and changed the subject
To, How 'bout 'dem White Sox,
and that was that.

But, meanwhile, before, during and after,
the real owls of the woods,
talked amongst themselves
about the humans Hoo hooing to each other . . .
The owls nodded, Not bad, not bad,
their accents are thick
but their phonetics are pretty good.

And the Queen of the Owls heard the story
of the two humans Hoo hooing each other
thinking they were speaking to a real owl,
and she saved up the tale
to tell to the God of the Humans,
and they both had a big gentle chuckle over
both the humans and the owls . . .

Speaking long into the night with
great tenderness, remembering
the thundering days in which humans
and creatures were first created,
about how glad they were
that humans longed to speak
to animals,
and how glad they were for animals
who heard the humans trying,
and approved.

The sad part; the two men
were terribly embarrassed over not knowing
the owl they were calling to
was another human being . . .
and they never stood on their porches or roofs again
crying out Hoo hoo, for they did not know
or had forgotten that inside every man
is a great raptor,
one who can see in the dark,
one who can lift its tip-feathers
and fly through forests
without making a sound.

But the embarrassed men had little sons and daughters
and the owls at night still practice their Hoo hooings
as close to the children's windows as possible . . .
for in the Church of the Owls
in their scripture scratched on bark,
it says that giants walk the earth
and that the entire kingdom of birds
has been given dominion over the poor giants,
to care for them, to lead them, guide them,
to watch over them while on Earth ...

To teach them, again and again, that inside
each soul is a great raptor
who can not only acutely see and hear
during dark times
. . . but also by merely landing,
with what seems so mere a weight
of twenty pounds of feathers,
thereby can cause the limbs of thousand-year-old pines
to bend all the way to the ground.

The prayer for this time, and with love:Go do likewise.

La Pasionaria ©1999, 2008 C.P. EstésPainting by Shebrew
Posted by Shaun Mullen at 5:00 AM
Email ThisBlogThis!Share to TwitterShare to FacebookShare to Pinterest

That was very good. Have a peaceful day.