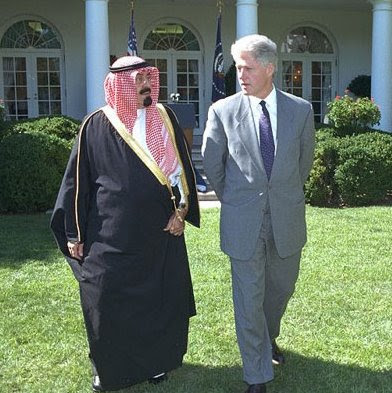 As a journalist, I'm always fascinated when -- and how -- the British press knows things about America before we do, as in this report in the Guardian that Hillary Clinton will indeed become Barack Obama's secretary of state. Not sure what to make of that; clearly she's qualified for the job -- even if her diplomacy "baptism under fire" wasn't quite what she made it out to be. And the fact that her biggest decision in the foreign policy arena was also her worst, voting to authorize the Iraq war in 2002, now seems like ancient history after the brutal and endless presidential campaign.

I still have a hard time getting around this, however. Earlier today, Bill Clinton said his wife would be an excellent choice for the job. No surprise there, but the issue isn't so much what he said but where he said it, in Kuwait City, where he was giving yet another big bucks speech, this time to the National Bank of Kuwait. Indeed, the husband of the woman who would be secretary of state has spent much of the last eight years spinning a web of foreign entanglements, from speaking and consulting fees to huge donations to his library and the Clinton Global Initiative and an array of other causes.

. . . If it were Bill Clinton himself up for secretary of state, I think he's too far gone. In the case of Hillary Clinton, however, the bare minimum here is full disclosure of all of Bill's post-presidency business dealings, especially with foreign nationals, and a pledge to refrain from any such activities while his wife is at the State Department.

-- WILL BUNCH
Obama would have Clinton right where he wants her: Out of the Senate and out of the country.

-- ME
I wrote a few days ago that Obama would be crazy to offer it to her and she would be nuts to take it. And there is still a chance she could turn it down or that Bill Clinton’s finances will turn out to be too problematic to pass muster with the Foreign Relations Committee.

But apparently, the offer is serious and she wants to take the job. Why? What do both principles have to gain?

Obama is in an extremely strong position – perhaps the strongest of any incoming president since Reagan. To say he has a blank check to do what he wants is perhaps an overstatement but ask yourself, who is going to stop him. The press? His own party? His supporters?

. . . For Hillary, her place is secure in the Senate as would be her position as leader -- if not in name than certainly as a result of her enormous visibility and influence. From the Senate, she could wait to see if Obama falls on his face and mount a challenge in 2012 if the opportunity were to arise.

But she would also be just one of many senators who would take center stage over the next few years as Obama’s initiatives worked their way through Congress. She would be visible but she might consider an option that would not only give her TV face time whenever she wanted it but add to her resume some tangible accomplishments that would cement her status as frontrunner for either 2012 or 2016. Hence, the idea of Hillary for Secretary of State.

[I]f he gives the job to Mrs Clinton, he would be ceding a large measure of influence over the reconstruction of America's reputation abroad to a former, and perhaps even future, rival who he could find hard to control. "Never appoint someone you can't sack," commented one old hand this week: and Mrs Clinton would be almost unsackable, thanks to her huge popularity among a large section of the Democratic Party and the status as an ex-president of her husband.