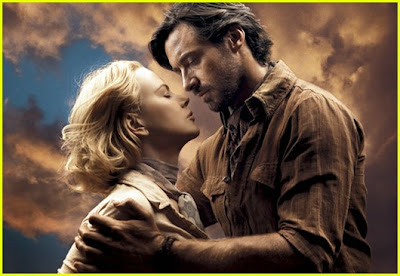 Once you get beyond the fact that Nicole Kidman, the world's most famous Aussie actress, plays a prim and proper English lady in the new movie titled Australia, Baz Luhrmann's widescreen epic goes down pretty bloody well. 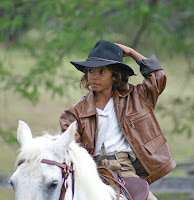 habituated, Hugh Jackman loving frontierswoman about half way through this 2 hour, 35 minute epic, which on one level is a kitchy, tear-stained, cattle stampeding, Japanese warplane strafing costume drama that includes virtually every Aussie stereotype short of the Sydney Opera House. (Oh, and there are no koalas).

But we don't mind because Kidman puts in a tremendous performance, itinerate drover Jackman is quite nice to oogle even if he can't act, Nullah, a mixed-race boy played by newcomer Brandon Walters nearly steals the show, and in the end Australia delivers a powerful moral punch. 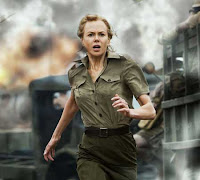 never been adequately redressed unless you believe that Prime Minister Rudd's official apology to these indigenous people earlier this year atones for two centuries of cruel mistreatment.

The movie opens in 1939 and tears through the major events of the era, concluding with the Japanese attack on Darwin shortly after Pearl Harbor.

Nullah's grandfather, an Abo elder named King George, influences the course of the movie in ways that could be hokey but are not. Luhrmann riffs off of The Wizard of Oz (get it, Oz?), which had just made it to 1939 Darwin, to powerful effect, tying together Abo dream weaving and fantasy with Dorothy's own version of same, but Australia always circles back to the main event: Kidman and Jackman.

Luhrmann cannot suppress his inner showman, and there are times when Australia threatens to become a confection. But it is a tour de force that has multiple Oscars written all over it -- maybe not Best Movie, but certainly Best Actress for the incredible Kidman, who holds the screen beautifully and absolutely.

-- THE DF&C and ME
If there is anything worse than the terrible twos, it's the terrible twos plus paparazzi. As evidenced by Forbes's Hollywood Hottest Tots list, a new generation of stars has

been born into the business. Whether they like it or not, these kids are front page material, and in some cases, they're saving their parents' careers.

. . . Idolising celebrity children may be a nice little escape, but it doesn't do the children any favours. Like I said, take all the complications and troubles of growing up in a regular non-famous family, and add the pressures of fame that are too stressful for even most adults to handle. Suddenly, it's not that cute.

-- MARY RICHERT
Gray, for fashion and for home, is the color of the moment. And while some might not immediately associate that color with traditional beauty, it can be truly gorgeous.

I don't speak French, but I think I get the message . . . Man, it keeps hitting you doesn't it? This whole "black president" thing is like fragmentation bomb. And I keep getting smacked by the shrapnel. This is fucking embarrassing. Look, this blog is Ta-Nehisi thinking out loud. I say it's embarrassing because I'm constantly worried about getting sucked in and churning out hagiography--to the point that sometimes I find myself just looking for things to disagree with Obama on.

-- TA-NEHISI COATES
W]hile I think there is some cultural impetus for black women working outside the home, I think more times than not, it is class privilege that gives people the ability or idea to "stay at home."

Outside of the class assumptions behind the idea of the "stay-at-home" mom, I don't necessarily think that Michelle Obama's choice to stay home is a win for us women of color that are just looking for a role model to let us know we can stay at home nor does it disrupt the racist idea that only white women stay at home. I think it feeds into antiquated notions of motherhood that make her more palatable to a wide audience suggesting that yes, she disrupts the idea of the "normal" American by being black, but is as American as apple pie, by staying in the home.

-- SAMHITA
A Japanese zoo puzzled by its lack of success in getting two polar bears to mate has discovered the reason -- both are female. 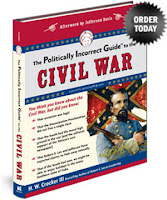 Regnery Publishing . . . just emailed me to promote one of their newest releases. This time, it's The Politically Incorrect Guide to The Civil War, which, you guessed it, reveals how "conventional 'wisdom' about the Civil War, slavery, and states' rights has been hijacked by Northeast liberals." Among the book's claims: "How the Confederate States of America might have helped the Allies win World War I sooner," and, of course, "How, if there had been no Civil War, the South would have abolished slavery peaceably.
-- NICK BAUMANN
No matter how much I enjoy thinking about the science of resurrection — and I do — I have to admit that the absence of mammoths isn't exactly a pressing problem. What is pressing is the number of species we are currently in danger of losing. It would be a shame if, in 200 years, our descendants were wondering whether to try and resurrect the elephant or the polar bear, the albatross or the mourning dove.

Let's get our act together. Let's prevent that first.

It remains to be seen how successful the Rudd Government's $20 million anti-binge drinking television advertising campaign will be and while I wish it every success, I dunno how it's gonna compete against the hundreds of millions spent to push piss as the essence of the Aussie way of life.

You can't turn on the TV over summer (or winter) without seeing boofy blokes from every sporting code blowing the froth off the sponsor's finest and giving the camera a wink, just in case you hadn't worked it out: getting drunk rules.

I daresay that's the terrible hypocrisy that leaps out at most teenagers, who more than anything want to be adults: the entire friggin' world glorifies sucking piss -- sportsmen, politicians, celebrities and mum and dad are constantly falling foul of over-indulgence -- yet nascent teen drinkers are expected to exercise control on the drink.