Paulson Does Something Right. (I Think.) 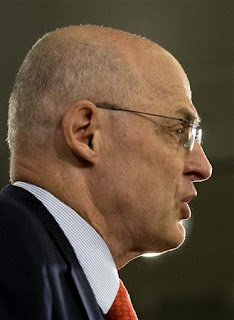 It appears to me that Treasury Secretary Paulson has it exactly right in announcing that the $700 billion would not be used to buy up troubled mortgage-related securities, let alone bail out automakers, which he acknowledges would merely be throwing money at their problems, but would be invested in a broad effort to bolster the financial markets. This includes making loans more accessible for home and car purchasers, as well as student loans.

I learned three things listening to Secretary Paulson on the Bailout program yesterday:

1. Paulson is a worse public speaker than Alan Greenspan (something I didn't think possible), leaving a more confused image of the Bailout Program behind him.

2. Homeowners will now not benefit from any kind of mortgage recovery from the Bailout, as it is now all going to keep banks afloat.

3. Since thee has, so far, been no oversight by Congress over the program, Paulson can do anything he wants without accountability.

In other words, we are screwed.

This morning's New York Times looks at it this way:

The nation’s banks and other financial firms also are undergoing a necessary correction for which there is no silver bullet. But that hasn’t stopped Mr. Paulson from intervening forcefully — using taxpayer dollars — on behalf of an ever-expanding cast of bailout recipients. The tight fist is reserved for homeowners.

Paulson, of course, wasn't even in attendance at Bush's Tuesday morning rollout of a new foreclosure prevention plan.

Sheila Bair, the fead of FDIC had made a proposal that (according to Reuters)

would have the government underwrite failing home loans, but Paulson said that kind of aid would break from the rescue fund's aim to stabilize financial markets.

"That is a subsidy or spending program. The TARP was investment, not spending," said Paulson, who holds the purse strings to the Troubled Asset Relief Program (TARP).

So we, as middle class homeowners, can now be aware of the fact that the billions of dollars in mortgaged properties nationwide are not assets. Democratic lawmakers, within hours, started pressing Paulson to change his point of view.

"It is my sincere hope that Secretary Paulson collaborates with Chairman Bair to get this program up and running as soon as possible," Senate Banking Chairman Christopher Dodd said in a statement.

It remains to be seen what happens next.