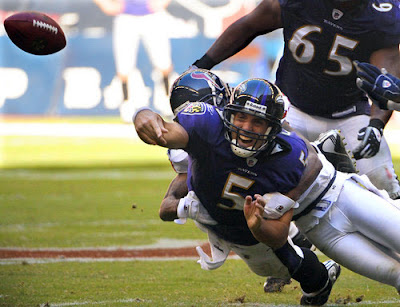 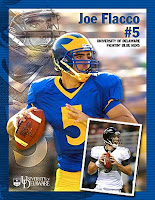 There may be no transition in sports more difficult than going from being a college quarterback to being a professional quarterback.

No matter how great they may have been at Big Time University, most ride the bench during their rookie year, and the trail of broken dreams is littered with many a quarterback who was destined for greatness but couldn't cut it.

Joe Flacco is a conspicuous exception, but for those of us who followed his exploits at the University of Delaware, where he led the Blue Hens into the 2007 FCS National Championship game, not a surprising one.

Flacco displayed a steely strength, amazing cool and quiet confidence in college. So it wasn't a surprise when the Baltimore Ravens took him in the first round of the National Football League draft, which is exceedingly rare for a small-college QB, and only slightly more surprising that not only has he started every game (owing to the team's starters being injury and ill) but is setting pro football on fire.

The Ravens were not supposed to be very good this season, but are now 6-3 in large part because of "Joe Cool," Flacco's new and hard earned nickname.

In his most recent game, a 41-13 rout of the Houston Texans on Sunday, he completed 15 of 23 passes, including two for touchdowns. He did not throw an interception for the fourth straight game.

And most impressively, Flacco has played the best when his team has needed him this most.

I HAVE NO IDEA WHAT THIS MEANS
You may recall that the Phillies became the first Philadelphia professional team to win a championship in 25 years late last month when they smoked the Tampa Bay Rays to win the World Series.
Well, no Philly team in any sport has won a game since Barack Obama was elected.

Posted by Shaun Mullen at 1:03 AM
Email ThisBlogThis!Share to TwitterShare to FacebookShare to Pinterest