McCain's Sleazapalooza: Too Big To Fail? 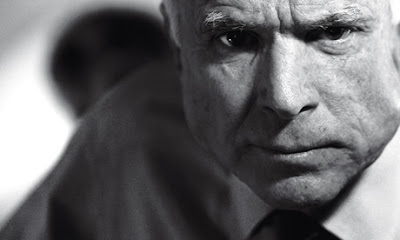 Do being honest and principled count for anything in an era when taking liberties with the truth is taken for granted and the high road is less traveled?

The answer is a tentative "yes" coming from someone who could have voted for John McCain not that long ago because he seemed to be a man of conviction whose moral compass was pointed in the right direction, but has watched with a dismay that has turned to horror as he runs what is easily the sleaziest presidential campaign of the nine that I have covered as a reporter, editor and blogger.

In yet another turn in an election year that has been chockablock with surprises, there is the makings of a backlash in the mainstream media and blogosphere (and we're talking not just danged libruls but some right-of-center folks, including that flipping Bill O'Reilly) over McCain's descent into the dirt.

Whether this backlash has legs remains to be seen. There is the reality that the media is a big megaphone: In pushing back against McCain's lies and obfuscations -- whether it is The Bridge To Nowhere or the obscene claim that Barack Obama believes that wee kindergarteners should be taught the birds and the bees -- they are amplified.

Like the assertions from Wall Street and Washington bigs that one financial institution after another "is too big to fail" as one financial institution after another fails, McCain may rue the day that he abandoned any pretense of decency in his quest for a prize denied him in 2000 after he was tarred and feathered by the George Bush campaign. This included a foray into racial demagoguery and misogyny through Karl Rove-orchestrated whispering campaigns that his adopted Bangladeshi daughter was a love child from an affair with a black woman and Cindy McCain was off her rocker.

For all of McCain's talk of being presidential, he has surrounded himself with handlers who cut their teeth on the very tactics that scuttled his own hopes. So self confident are these handlers in the power of deceit that they unashamedly boast that the most important presidential campaign in decades will be won or lost not on the issues that cry out for discussion, but on personalities. And that there are "bigger truths" that trump "little facts."

Now it is Obama's turn to get tarred and feathered with lies, sometimes with racial undertones, while the cudgel of misogyny that the McCain campaign swung at Hillary Clinton a few months ago has magically been handed off to Obama, who is accused of picking on Sarah Palin because she is a woman (who in a much anticipated foray from her Cone of Silence confirmed that she is clueless, scary and way out of her league in an interview with ABC News's Charles Gibson).

Meanwhile, McCain glowers in his own Cone of Silence, his message no more coherent than it was during the primary season, while his handlers assure him that there is no need to get real because the unreality of the Palin pick has been terrific for his numbers.

It has been four weeks since McCain held a press conference and three weeks since the last town hall meeting; you know, the kind of sitdown that he berated Obama for not embracing although Obama readily agreed to such face-to-face encounters while balking at his opponent's fine-print demands. McCain, just like the man he is so desperate to succeed, now appears at carefully choreographed rallies closed to the general public with his new gal pal in tow.

McCain reveals himself to be lacking not just in gravitas, but in character, as well, at a time when the America he incessantly reminds us that he served in war and claims to honor cries out for leadership. But, alas, I have left a few million key enablers out of this equation.

Many voters surely are as appalled as I am by McCain. But to riff on the hot phrase of the moment, many voters are pigs whether they wear lipstick or not.

You'd better believe that McCain's mendacious maestros are counting on a content-free message of smearing, lying and fear mongering to resonate with the thoughtless more than it will turn off the thoughtful.

Obama does not deserve to get a free pass. Far from it. But unless the now modest backlash against McCain has legs, America may not only be in for four more years of the same old same old, but end up with another president who has sold his soul.

Posted by Shaun Mullen at 3:50 AM
Email ThisBlogThis!Share to TwitterShare to FacebookShare to Pinterest

I just wanted to say thank you so much for being the only blogger (aside from Al Giordano) who gets it. While the rest of the blogosphere (especially the liberal bloggers) lose their heads you are an island of common sense. Patience and Steel. Yes, yes. yes.

It also occurs to me that in a way McCain and Rove have actually simply taken over the liberal blogosphere in some way. They are being played.

Just a few examples---yesterday Obama gave a fantastic interview at the Service Forum. Did the liberal blogs even cover this? No.

He gave a great speech on the trail. Are his town halls even posted or excerpted? No.

The liberal bloggers have become McCain central. They make people click on his ads, make the world spin around him instead of focusing on our candidate and what he is trying to do. There is ZERO coverage of what Obama is actually doing every day talking tough on the issues. There is ZERO coverage of Biden (who is on the trail but the blogs don't seem to care or cover him unless he is doing what they think he should be doing. Sadly AFP did cover him this week and people seemed to be too busy saying he was not doing anything to include the link with his forceful comments against McCain. The one time the blogs linked to Biden---when the MSM tried to make a big deal out his answer to a question that made Hillary look bad and he defended her. That was it).

McCain and crew realized early this cycle that they did not have a visible internet presence. So what did they do? They took over the liberal presence, they are manipulating the leading liberal blogs , just as they manipulate the MSM. All to their own advantage. And the blogs have all fallen for this hook, line and sinker. Does no one realize this?

They are all being played.

And Obama, god bless him, he gets it. As does his team. while everyone whines he keeps at it every day with much much class and like a laser focused on the issues. The problem is not Obama, is that no one wants to follow his lead. Instead they are following McCain-Rove and they don't even know it.

Pass it on, Shaun.