Quotes From Around Yon Bailoutsphere 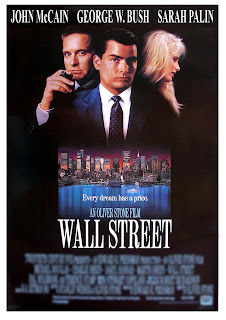 As a housing crisis worsened in the summer of 2008, Congress debated a variety of different bailouts. The current insanity includes an outrageous bailout of nearly a trillion dollars, proposed by Treasury Secretary Hank Paulson. It is terribly expensive, prevents judicial review, and is fraught with moral hazard, rewarding bad judgment and excessive risk. It focuses on all the wrong issues. It punishes the prudent and rewards the profligate.

Worst of all, it is unlikely to work.

The collusion between financial interests and the government is an old story, and it is one viewed with hostility by the Country tradition, a significant part of the American political tradition, dating back before Jefferson inveighed against “the moneyed interest.” Nothing can better demonstrate how antithetical this collusion is to a free market economy than the last week’s events. And what does the conservative movement, supposedly so energized and dynamic now that Sarah Palin has arrived on the scene, to say about any of this? Very, very little. These are the people who will refer to prominent figures in the movement’s past, will name-check their books and will talk about reducing the size of government, but they are ultimately quiescent, or even actively supportive, when an administration that they have empowered oversees one of the largest expansions of the state in U.S. history. Absurdly, their new champions, including the mighty Palin, talk about fiscal responsibility and restraining spending…while more or less signing off on some of the largest spending measures ever undertaken that will ultimately add over one trillion to the national debt.

As best as I can tell, the Bush administration has convinced itself that it has brought on the Second Great Depression and it is desperate to do something to prevent a full meltdown on their watch.

Instead the crisis came about because, once again, Washington allowed the wizards of Wall Street to tell us that this time they really have discovered something so clever and foolproof that we didn't need to worry about old fashioned notions like matching assets and liabilities, maintaining reserves and oversight of the capital markets.

I tend to think that voters are really, really stupid. But I am optimistic that they will sense that the Paulson plan is not in their best interest. My guess is that if Congress goes home and faces the voters before they pass the bill, rather than the other way around, the plan will die a well-deserved death.

The Bush administration has done this before. Many times. It’s always worked till now, so of course they’re going to try to do it again, what can simply be called the rape of America by emergency legislation.

The recipe is simple enough:

Take a crisis, real or imagined. Create a whole lot of fear around it. Propose an emergency legislative solution. Persuade Democrats — who don’t seem to take much persuading when it comes to such claptrap — that, despite its evident flaws, opposing said solution will be political suicide. Ram through the thoroughly flawed emergency legislation with zero discussion or debate. Try not to smirk when Democrats slowly realize in retrospect exactly what they have allowed themselves to be manipulated into supporting. Try not to remind Democrats how many times they’ve fallen for the exact same trick.

Republicans have decided that their argument on the credit crisis will be to argue that Democrats created the crisis by forcing banks to give too many loans to black people and other minorities.

Trying hard to find empathy here. And failing miserably. I want to feel badly for folks on Wall Street who are losing their jobs right and left during this (is there a term for this?) not a depression, but whatever the heck it is. I want to feel empathy for anybody who loses a job. But what pops into my mind isn't a family struggling to survive with both parents working 2+ minimum wage jobs apiece. What pops into my mind are money-mad men and women who hopped onto a train heading for a shaky bridge. People who either couldn't or wouldn't see the shaky bridge and those who were on the train for whatever money they could before the crash. Either way, not a lot of sympathy here for these folks. The power lunch crowd, the folks who dropped $150 for a hamburger because it was Kobe beef.

Imagine it is 1998, and you are a writer for the online version of the National Review. In the past couple of weeks, President Bill Clinton has nationalized hundreds of billions worth of hospitals, and is now proposing a close to $1 trillion giveaway to the health insurance industry. First, imagine for a moment what the collective freak-out would be like from the right. Christ, you would be able to hear the hysterics coming from Rush Limbaugh without a microphone.

Then write your headline and put it in the comments. My headline: