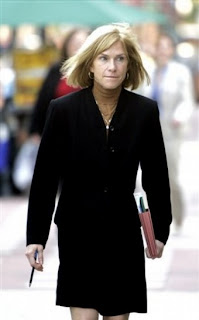 The decision by Mukasey, who has proven himself to be a reliable Bush administration lap dog in all things, followed an internal Justice Department investigation which concluded yesterday that political pressure drove the firings of several federal prosecutors.

"The 356-page report, prepared by the department’s inspector general and its Office of Professional Responsibility, provides the fullest picture to date of an episode that opened the Bush administration up to charges of politicizing the justice system. The firings of nine federal prosecutors, and the Congressional hearings they generated, ultimately led to the resignation of Attorney General Alberto Gonzalzes last September.

"The investigation, which uncovered White House e-mail messages not previously made public, offered a blistering critique of Mr. Gonzales's management of the department. It called Mr. Gonzales 'remarkably unengaged' in overseeing an unprecedented personnel review, and said that he 'abdicated' his administrative responsibilities, leaving those duties to his chief of staff. It said that the process for deciding which prosecutors were fired was 'fundamentally flawed.'

"More troubling, the investigation concluded that, despite the denials of the administration at the time of the controversy, political considerations played a part in the firings of at least four of the nine prosecutors."

The report concluded that the most serious case was the firing of David Iglesias, the former U.S. Attorney for New Mexico, who had locked horns with two of his state’s leading Republican lawmakers, Senator Pete Domenici and Representative Heather A. Wilson.

Mukasey appointed Nora Dannehy (photo), the acting U.S. Attorney in Connecticut, to continue the inquiry and determine whether anyone should be prosecuted.