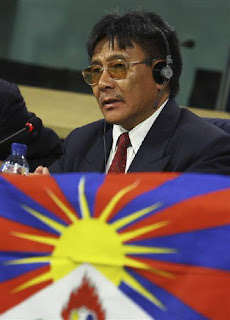 The Tibetan government-in-exile said it would make a final decision on whether to continue dialogue with China to ease tension in Tibet after their next encounter ends in October.

"I think the talks may go on, but these talks will only be about talks. They (China) will not really give us anything, concede anything," Karma Chophel, speaker of the Tibetan parliament-in-exile, said in Dharamsala, the base of Tibetan spiritual leader the Dalai Lama.

The proposed eighth round of talks on easing tension in Tibet had been scheduled for October, officials said.

. . . The Dalai Lama, who was treated in a Mumbai hospital last month after complaining of abdominal discomfort, has cancelled a planned tour of Europe and will attend the special meeting in November or December, Chophel said.

The extraordinary gathering is to discuss political unrest and the future of the Tibetan movement, he added.

Jigme, a Tibetan Buddhist monk, says he had just finished having a pair of shoes mended when four uniformed guards jumped from a white van and dragged him inside.

Suppressing his calls to a passing nun for help, they shoved a sack over his head and drove him to a guesthouse run by the local paramilitary People's Armed Police.

What followed, according to Jigme, was two months of interrogation and abuse over his suspected role in this spring's uprising against Chinese rule across Tibet and a broad swath of Tibetan-inhabited regions in western China.

The Chinese authorities have admitted that the large-scale migration from China may have triggered the March protests in Lhasa. According to a report posted on its site by the International Campaign for Tibet, the TAR Deputy Party Secretary Zhang Yijiong acknowledged that there had been many "problems" with management of the "floating population" of Chinese migrant workers to Tibet, particularly since the opening of the Qinghai-Tibet railway.

Zhang, who was speaking at a government conference in Lhasa, specifically linked this problems to the security situation when saying that "All areas and all departments in Tibet should from the strategic high ground of protecting state security and protecting Tibet's stability deeply understand the important significance of carrying out well service and management work for the floating population in Tibet."

The comments suggests that the Chinese authorities are aware that large-scale migration from China was a destabilizing factor in the recent protests in Tibet, particularly on March 14 in Lhasa, when Tibetans burnt shops and houses belonging to Chinese, ICT said in its report.

Reporters Without Borders calls on the Chinese authorities to release Dhondup Wangchen, who made a documentary about Tibet, and Jigme Gyatso, his friend and camera assistant. They have been unjustly detained since March 2008 for filming interviews with Tibetans, above all in the Amdo region of Tibet

"The case of Wangchen and Gyatso is a tragic example of what happens when Tibetans take the risk of trying to interview people about the situation in the province," Reporters Without Borders said. "The Chinese government decided to reopen Tibet to foreign tourists, and now it must show clemency towards those who have been detained solely because of what they or others said."

Wangchen’s wife, Lhamo Tso, told Reporters Without Borders that she still does not know exactly why they are being held. A resident of the northern Indian city of Dharamsala, Tso said her husband was reticent about the purpose of his proposed long trip when he set off for Tibet in October 2007. After losing touch, she was told at the end of March that Wangchen and Gyatso were arrested on 23 March in the Siling area.