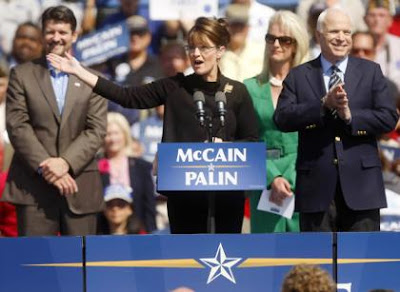 It's no surprise that Democrats are stressing the importance of a great ground game - and, psychologically, taking refuge in the belief that they now possess one - given the events of 2004. They woke up the day after the election to discover that John Kerry's good ground game (expanding the electorate with eight million new Democratic voters) was trumped by the excellent Bush-Rove ground game (which added 12 million new Republican voters). There had been some stories in the press about how the Bush forces were doing all kinds of sophisticated "micro-targeting" - zeroing in on GOP-friendly communities by studying consumer information and magazine subscription lists - but many Democrats were stunned and depressed by the results. Hence the determination to trump the GOP this time around.

Of course, we won't know until the votes are counted on Nov. 4 whether Obama is truly marshalling a victorious army of voters below the radar, an army supposedly impervious to the fluctuations of the daily news cycles and the daily tracking polls - most of which, lately, have favored McCain. An argument can certainly be made that the Obama ground game, matched with the underlying fundamentals of the national mood (a tanking economy, a disastrous Republican presidency), should be enough to withstand, although not without periodic crises of the spirit, the tactical pyrotechnics of the McCain campaign.

But I wouldn't be so sure about Obama's vaunted secret weapon - not so much that it will fail in its mission of expanding the electorate, but that its effectiveness might be successfully blunted by the GOP's energized ground game. The Republican National Committee, which is running McCain's ground operation, is well-schooled in the art of micro-targeting, because it has been practicing that grassroots tactic since the '02 congressional races. Plus, the RNC has plenty of money to do it again. Plus, the conservative grassroots will be increasingly energized if McCain and Palin keep dominating the news cycles (thanks, in part, to the fact that many media outlets, particularly those on cable TV, are easily drawn to the faux trivilalities, such as "lipstick on a pig").

Plus, and perhaps most importantly, McCain's choice of Sarah Palin has galvanized the conservative grassroots in ways that McCain himself could never do. A great ground game operation is useless unless it is fueled by enthusiasm. Palin is the fuel.

The media-gush phase of Sarah Palin coverage is over - now begins the real media scrutiny.

I understand that most black Americans will believe that an Obama defeat will have stemmed in substantial part from a prejudice that robbed 40 million Americans of the change to become president on the day they were born black. They will of course understand that race wasn't the only significant variable -- that party affiliation, ideological proclivities, strategic choices and dumb luck also mattered. But deep in their bones, they will believe -- and probably rightly -- that race was a key element, that had the racial shoe been on the other foot-- had John McCain been black and Obama white -- the result would have been different.

One thing is certain: Obama has totally abandoned all that made him different and exciting to so many voters and now appears to be just another Democratic politician.

John McCain caught Sarah Palin at the rising part of her career arc. She had been governor for not two years. She dusted away a lot of incumbents who needed to be dusted. Her original proposals for revising Alaska's severance tax look reasonable and prudent. (What emerged from the legislative process on the other hand looks dangerously confiscatory - and also exposes Alaska to greater downside risk in the event of an oil price drop.)

What comes next for her? How would she deal with adversity - and the criticism that accompanies adversity? How strong are those dark aspects of the reformer personality. . .?

It might have been better to wait to learn the answers to those questions before putting her at the top of a party ticket. But the decision is made - and the answers will come.

[T]he portrait [on "Saturday Night Live"] was very dismissive of the substance of Sarah Palin, and so, in that sense, they were defining Hillary Clinton as very substantive and Sarah Palin as totally superficial. I think that continues the line of argument that is disrespectful in the extreme and yes, I would say, sexist, in the sense that just because Sarah Palin has different views than Hillary Clinton does not mean that she lacks substance.

At this point, McCain has taken the obvious way out—launching a series of distracting attacks on Barack Obama with slim regard for truth.

The ads have spurred a backlash, the consequences (or lack) of which may well decide the election.

For 18 months, Obama has wagered all his chips on the (quaint? idealistic? brilliant?) idea that the American people are tired of the same old sleazy and divisive politics. McCain has now chosen to bet against him.

And we are the cards.