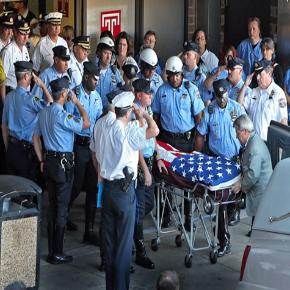 The murder of any police officer is an outrage, but when Highway Patrol Officer Patrick McDonald yesterday became the fourth Philadelphia cop to be gunned down in 11 months, the financial crisis and the wars in Iraq and Afghanistan, let alone the presidential campaign, seemed ever more like abstractions.

McDonald, a star athlete in high school and eight-year veteran of the force, was widely admired. The 30-year-old bachelor had bought and lived in the house in the Morrell Park neighborhood where he grew up, and neighbors considered him to be their son, their father and their protector.

For what it is worth, McDonald's assailant also died. For what it is worth, it will only be a matter of time before the handgun the perp used is likely traced through a series of legal transactions until it entered the city's thriving gray market in devices the kill. Because, you see, in Pennsylvania just about anyone can buy a gun with few or no questions asked. Just don't get caught smoking on school property or, heaven forbid, enjoy a puff of marijuana once in a while.

Philadelphia has been the epicenter of an epidemic of gun violence for years, but it is not permitted to enact its own tough gun laws like, say, New York City, because of an adamantly pro-gun state legislature.

I worked in Philadelphia for 21 years. I knew a lot of good cops and a few bad ones. The tears I shed last night when a television station's news helicopter followed the hearse bearing the slain officer's body from Temple University Hospital down streets, boulevards and freeways cleared of traffic to a mortuary were bitter.

Patrick McDonald didn't have to die, but he did because in Pennsylvania the love of guns is more important than the lives of cops.

Sorry, ain't got no pity for a pig.

fuck the police, let 'em all be shot dead.

The problem is that the left and right cannot talk to each other in any civilized fashion. Only Rendell seems able to build any bridges, and that's not good enough to make anything happen.

In Potter County everybody can have a gun without risking social upheaval, but in Philadelphia it's insanity. The closeness of quarters and tensions of life make it absolutely necessary to keep guns away from felons, children and lunatics.

The problem, as I'm sure you know, is that anyone can become a defacto gun dealer. It's just like the creeps who buy cigarettes and beer for the kids at a markup. The result is that the people most unsuited to carry guns are the ones most likely to have them.

The sensible compromise in Harrisburg should be the one-gun-a-month bill. That's the only handle you have for prosecuting the illicit retailers.

There are many other sensible measures that involve zero risk to the 2nd Amendment. Why can't anyone explain this so that the voters can understand? Is it just hatred of the City?

Can someone erase that idiot's comment who has no regard for people who loved Pat McDonald?
Fucking asshole. Can't even identify him or herself. Coward. And who will that person be running to when someone steals their computer so they can't write senseless ignorant shit on it anymore?
The only person who was a pig in this situation was the animal who stood over and executed Officer McDonald.
I'd pray for that piece of shit, but it wouldn't do any good. He was already given another chance and he blew it. I hope he burns in hell for eternity.
I, for one, knew Pat McDonald my whole life. I don't appreciate people being so ignorant because they think it's cool. In my mind, if that's how they think, they are terrorists and should be executed themselves.
~Katie Nelson

I hope they did erase it. He is a COWARD in the full sense of the word. Doesnt even have the B..ls to put up his name.!!

It is such a sad state. I cant express enough the saddness I feel for the family, extended family and friends ! All we can offer is our prayers. I raised my children in NE Philly and they went to Archbishop Ryan. My youngest graduated with Pat.

My youngest has become a police officer.

It is expression like that idiot put up on here is the problem with this world and the country we live in. We dont enforce coscequences for the actions and choice these people make. They get off too easy! Our taxes feed and cloth them when they are in prison and then we release them and they take the life of our wonderful good people!! Further more
We send our boys over to Iraq, Iran etc. fighting and some do not come home.
I think that we should send crimminals over there. Let them dodge the car bombs etc. Paracute them down with some provisions and let them fend for themselves. They are so smart, they will figure it out, how to survive.
Talk about good consequences
Instead we send our best of the best over to die. Leave the evil on the streets to kill our officers and innocent by standers etc.

Way to Go Katie!! Amen!
I just saw your comment and You Tell that idiot.
We can change this world ONE WOMEN AT A TIME!!