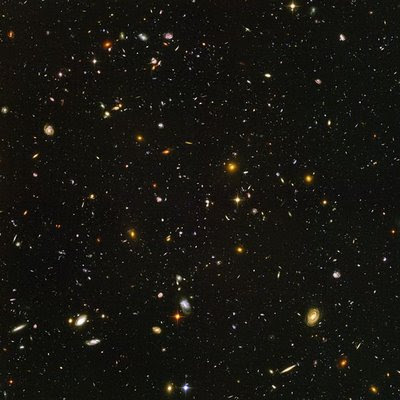 The photo was made by the Hubble Space Telescope during 400 orbits of the Earth, a total exposure of 11.3 days. It shows a tiny spot of the southern sky in the constellation Fornax, a speck of the dark night you could cover up with the intersection of crossed sewing pins held at arm's length. There appears to be five or six foreground stars in the photo (the dots with spikes), stars in our own Milky Way Galaxy. Then, beyond, at ever increasing distances, reaching back almost to the beginning of time -- galaxies. Spirals, ellipticals, sphericals. Ten thousand galaxies in all. And these are presumably only the brightest, the galaxies with upwards of 100 billion stars or more.

We would see more or less the same thing looking out from Earth in any direction. It would require 20,000 photos like this to cover the bowl of the Big Dipper, 13 million to blanket the entire sky. A whole-sky survey at the same resolution would reveal 130 billion galaxies.

A new study adds weight to a growing body of studies and reviews that have debunked the notion that childhood vaccines cause autism.

While we’re transfixed by the Presidential election, in the world of high tech another duel between two well-funded, take-no-quarter candidates has just emerged . . . and in the long-run the impact on our daily lives may be nearly as great. And perhaps even sinister.

As you probably heard, last Monday – that is, on a national holiday, when business announcements are almost never made – Google rolled out "Chrome," its new web browser.

Nowhere is the power to apply technology for its own sake more available than at Google. And despite the company’s motto, and childlike logo and homepage, this is the real driving force behind the company. And the long-term goal of this applied technology? Google has already said it: to manage all of the world’s information.

Why the odd timing? Hard to say. Google surely knows that just about anything it does these days is going to cause a news frenzy – and especially when it’s announcing its first thrust into a huge new market. So, perhaps it hoped to temper this coverage to a degree, and drag it out for several days. Or perhaps Google was unsure about the product itself, and didn’t want to overhype it – and then face a potential backlash. Or, maybe Google just didn’t think Chrome was that important, saw a window between the two political conventions and rushed it out.

Well, now that Chrome is out and being field-tested by reviewers, I think we can rule out the second and the third scenarios. That leaves the first: but why would a company that knows it has a solid and newsworthy product on its hands, choose to intentionally dampen media coverage of it?

The answer, I think, was that it was a long-term strategic decision to make Chrome look almost like an afterthought. And I think that decision was made at the highest levels of Google, perhaps by CEO Eric Schmidt himself. Why? Because Google's ambitions are bigger than most of us have ever imagined, and the company is now rich enough, and powerful enough, to execute them – even if it means the short-term sacrifice of a major new revenue source.

One more thing: if Google does pull off this strategy, it will be the most valuable on the planet. It will also be the scariest . . . and we should start worrying about that right now.

I do think Google has a pretty creepy corporate culture, not overly law abiding and respectful of the IP rights of others, and with imperial ambitions. They scare me, but golly, they do make good products. I do think it's wrong for them to keep all those brains they stole from orphans alive in vats underneath their server farm in Oregon just to alpha test their products, however, even if the technology is really impressive.

David Moxon subjected 40 men and women to the sounds of a Maserati, Lamborghini and Ferrari, then measured the amount of testosterone in their saliva. He found everyone had higher levels of the stuff — a measure of their arousal — after hearing the revving exotics, but the amount the women had was off the charts.

The econobox, however, left everyone colder than a January day in Nome.

International scientists celebrated the successful start of a huge particle-smashing machine on Wednesday aiming to recreate the conditions of the "Big Bang" that created the universe.

Experiments using the Large Hadron Collider (LHC), the biggest and most complex machine ever made, could revamp modern physics and unlock secrets about the universe and its origins.

Someone smarter than me once said that "indecision becomes decision with time" and such is the fear many people have of making life choices they postpone them until inertia or outside influences force their hand.

Part of that anxiety may have something to do with the actual concept of a "decision" which comes from the Latin word decidere, "to decide", and means "to cut off" or "cut the knot".

Not surprisingly, a lot of people look at decision-making as the "cutting off" or the killing of choice, so they opt out altogether, go with the flow, dead fish in the river of life.