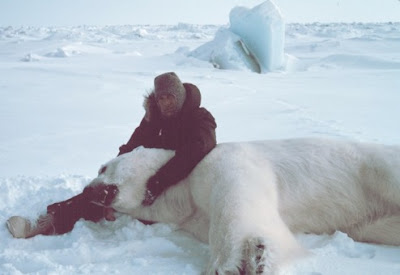 I have said from the day she was nominated that her attitude toward animals was a serious weak point for Palin. It wasn't about regular All American hunting. This was about her not caring if the polar bears drown and supporting aerial wolf hunting, which takes her way into the outer boundaries of the anti-environmental and gun culture. She is far from being mainstream on a whole host of issues, but this is one that creates a visceral, emotional reaction and shows just how extreme she really is.

One of the more pressing questions facing today’s staggering, flailing Republican Party, oddly enough, is which Democratic Party it most resembles: the party of 2004 or the party of 1980? For a GOP torn between retrenchment and renewal, between trying to hold the Reagan coalition together and blowing it up and starting over, the answer makes all the difference in the world.

The Democrats of 2004 were mired in gloom, convinced that the GOP of Karl Rove and George W. Bush had a lock on the hearts and minds of Middle America. But the party’s fundamentals weren’t nearly as bad as the doomsayers thought: the Democrats had lost two presidential elections (one of them against an incumbent in wartime) by whisker-thin margins, and the demographic trends that had led John Judis and Ruy Teixeira to proclaim an “emerging Democratic majority” were still moving in their favor. They were well-positioned, in other words, to capitalize on George W. Bush’s disastrous second term—and capitalize they have.

The Democrats of 1980, on the other hand, turned out to be much worse off than they looked on paper after Ronald Reagan’s landslide win. Reagan had triumphed amid stagflation and the Iran hostage crisis, and his victory could have been read as a fluke rather than a realigning triumph—a win that had more to do with the unpopularity of Jimmy Carter than with deeper weaknesses in the liberal brand. The Democrats still enjoyed a 50-seat edge in the House of Representatives, and they had lost presidential races before—to Eisenhower, to Nixon—without forfeiting their position as America’s natural majority. But ’80 was different: although the Democrats would rebound from their defeat, the political and policy initiative had passed from liberalism to conservatism, where it would remain for the better part of two decades.

The Republican Party has proven itself to be inept in both foreign and economic policy and also to be fabulously corrupt. McCain cannot distance himself from that failure. The question is whether this disaster will resonate throughout the downticket races. I hope so.

The Obama campaign has been one of real dignity and cool, and in this it reflected its candidate. It won't be good to see this end. It will be sad, actually.

On the Republican side, the legitimate anger sparked by the media's personal attacks on Sarah Palin and her family has now been funneled, coolly and almost chillingly, into antimedia manipulation. This is no good. It may help the Republicans win, because no one likes the media. Even the media doesn't like the media. But it invites charges of winning bad. And if you win bad in a 50/50 nation, it makes it really hard to govern.

A final point. Do you ever have the passing thought that the presidential election doesn't matter as much as we think? Whoever wins will govern within more of less the same limits, both domestically and internationally. A New York liberal leaning toward Mr. McCain told me this week he has no fear that Mr. McCain may be a more militant figure than Mr. Obama. We already have two wars, "we're out of army." Even if Mr. McCain wanted a war, he said, he couldn't start one.

As Washington prepares to tap taxpayers for a bipartisan bailout of the US financial system, is it out of order to ask our Iraqi friends who are sitting on $80 billion of oil profits to put a little something into their own pot?

For better or worse, the candidacy of Barack Obama, a senator-come-lately, must be evaluated on his judgment, ideas and potential to lead. McCain, by contrast, has been chairman of the Senate Commerce Committee, where he claims to have overseen "every part of our economy." He didn’t, thank heavens, but he does have a long and relevant economic record that begins with the Keating Five scandal of 1989 and extends to this campaign, where his fiscal policies bear the fingerprints of Phil Gramm and Carly Fiorina. It's not the résumé that a presidential candidate wants to advertise as America faces its worst financial crisis since the Great Depression. That's why the main thrust of the McCain campaign has been to cover up his history of economic malpractice.

An internal Alaska government document obtained by ABC News shows that Sarah Palin's staff authorized a trip by then-commissioner Walt Monegan to Washington, DC -- the trip she has since claimed was unapproved and the basis for his firing.

Whether you like it or not, people are talking about the "fundamentals of economy are sound" line this week like they were talking about Palin’s fumbling of the Bush Doctrine last week. This is why McCain has gone negative on Obama and tried like hell to tie him to this crisis. Because he needs to climb out of the hole he’s dug himself.