The Staggering Cynicism Of John McCain 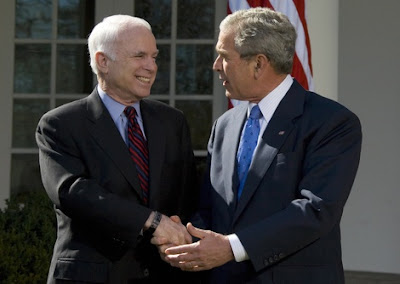 It's the longest Hail Mary pass in the history of either football or Marys.
-- REP. BARNEY FRANK
The familiar frat boy smirk was absent when George Bush went before the nation last night to cry wolf.

The man speaking from the White House had recently managed the feat of polling disapproval ratings lower than Richard Nixon during the week before he resigned, while the people objecting most vociferously to the $700 billion taxpayer-funded bailout plan being engineered by Treasury Secretary Henry Paulson, the de facto president of the hours, were conservative Republicans.

Representative Jeb Hensarling of Texas set the bar high before the president beseached Congress to speedily approve the bailout:

"Those of us that have studied the Bible know that the Lord made the world in seven days. We are now being asked to reshape the financial world in less than half that time and without the benefit of divine powers.

"It defies common sense to pass a potential trillion-dollar bailout bill without having a rational and deliberate conversation about other potential alternatives and remedies. I remain skeptical of the Paulson plan and am utterly unconvinced that this is the only alternative."

The only surprise of the evening was that John McCain didn't sidle up to the president as he spoke to let us know that he was back in the 'hood. And even though he hadn't shown up for a Senate vote since early April, was ready to rumble.

* * * * *
We'll leave it to the historians to sort out the exact sequence of the extraordinary events in the hours before the president's prime-time hankie wringing, but the general outline is clear:

Early on a day when even the national polls showed Barack Obama pulling away from McCain, the Democrat called him and privately suggested that the two issue a joint statement in an effort to keep presidential campaign politics from becoming an impediment to bailout package deliberations. The offer echoed a similar one Obama had made that resulted in the candidates appearing at Ground Zero earlier in the month on the anniversary of the 9/11 attacks.

McCain huddled with his advisers. He finally accepted several hours later, but only after he rejected Obama's call for the bailout package to include oversight provisions, cap executive salaries and help foreclosed homeowners. His campaign then announced then that, in so many words, it was pulling the rug out from under the entire purpose of the joint statement and injected a huge shot of campaign politics into the deliberations. McCain was suspending campaigning, was rushing back to Washington and would skip the first presidential debate tomorrow night.

As the day went on and McCain preened before the cameras not in Washington but in New York City, with timeouts for Katie Couric and Lady Lynn de Rothschild but not David Letterman, one of the candidate's leading surrogates added a further wrinkle: That the first presidential debate should supplant the only debate between Joe Biden and Sarah Palin.

It is not known if Palin is suspending campaigning since she wasn't doing any of substance in the first place.

Except that Obama wasn't buying. And, according to overnight polls, neither are most voters.

Obama cited the gravity of the financial crisis in rejecting McCain's call to postpone the debate:

"It is my belief that this is exactly the time when the American people need to hear from the person who, in approximately 40 days, will be responsible for dealing with this mess. It is going to be part of the president’s job to deal with more than one thing at once."

Ploy. Flailing. Cut and run. Stunt. Bizarre. Choking. Preemptive. Gimmicky. Brilliant. Retreat. Cowardly. Desperate. Surreal. Those are but a few of the words being used to describe McCain, but I think these sum it up best: Staggering cynicism.

From his metamorphosis from Mr. Clean to Mr. Dirty to his selection of Palin, cynicism has been the underlying theme of McCain's run for the roses. It has inculcated nearly everything he has said and done since he became the last man standing after the Republican primaries, albeit the most elderly and addled.

John McCain is gambling that this is a moment -- and perhaps his last -- to prove that he is presidential. His real intention, of course, is not to help rescue the economy, but his own campaign.