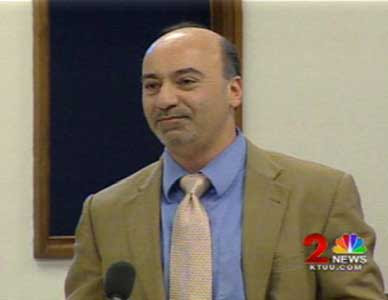 "It's silly season up here in the far north, but this week's moves are aimed at one thing: John McCain's effort to find cover for being disingenuous. See, before Governor Palin's nomination for the Republican VP spot, she did the honest thing. She admitted the evidence - of roughly 20 contacts between her staff and husband with Public Safety officials, seeking the firing of Governor Palin's former brother-in-law - might lead a reasonable person to the conclusion that the she misused her office to fire a state employee. So when Alaska's Republican-led Legislature called for an investigation, she did the honorable thing and said she and her staff would comply. She denies any wrongdoing.

"So they have engaged in daily maneuvers to attack, as disloyal to the McCain campaign, anyone who wants the investigation to move forward. They've now attacked two well respected prosecutors, and perhaps the state's most highly regarded law enforcement official - the Public Safety Commissioner she hired, and then fired, Walt Monegan.

"Every day this week McCain operatives have sung the same tune. Today a guy with an East Coast accent, who knows nothing about Alaska, stood in front of a McCain-Palin banner to lead the attacks against people he doesn't know. At press conferences on Monday and Tuesday campaign staffer Megan Stapleton spit vitriol to repeat her argument that this investigation is really a "Democratic" attack on Governor Palin.